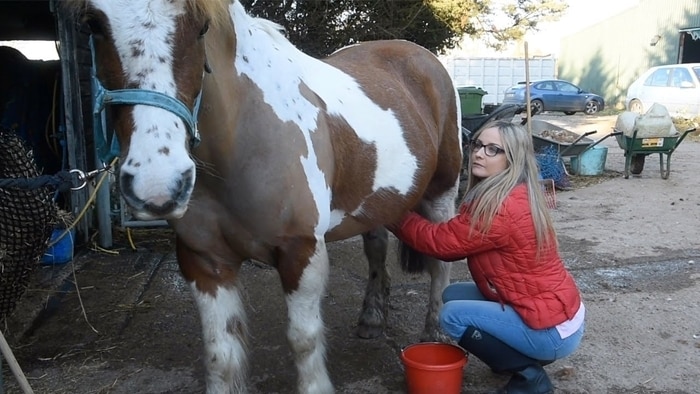 Mercedes Doblin, also known as the Sheath Queen, makes her living cleaning globs of dried semen known as ‘beans‘ off of horses penises.

Doblin has cleaned up roughly 200 horses at $33 a time since quitting her job in October as a carer. She claims she has loved horses always and has never found washing their genitals bothersome. Doblin from Chelmsford, Essex, stated: “I don‘t actually mind doing it at all, I‘m happy that I can make a difference and make a horse happier.”

The build up of dirt, urine and semen gathers into a stone-like cluster known as a bean. Beans can meddle with a horse‘s ability to properly pass urine, which can lead to kidney problems and infections. In the summer, if a horse boasts a bean it can cause even more issues. Mercedes says she has had to dislodge maggots from horse willies before due to flies being attracted to the smell and laying their eggs there.

On any given day Doblin could be ridding up to 30 beans from horses. Actually, she has three horses of her own stabled. Doblin elected to do this as a living after she discovered a bean in her own horse, Leo. She said: “I rummaged around and found one and then my friend suggested I should do it as a living. “My husband thought I was joking and my family think it‘s the most disgusting job ever, but I enjoy it.”

Removing horse semen isn’t always easy, though. Doblin’s been kicked numerous times but luckily has not sustained any broken bones thus far. She added: “I‘m pretty good at dodging out of the way now! But I have been kicked really hard before and left black and blue with bruises on my leg. Most horses realize that I‘m only trying to help them.”

The Michelle Obama Podcast was released on the 29th of July and can be streamed on Spotify, both for free and premium users. The world is currently hyped that the Former First Lady of the United States has released the first episode of her latest podcast. What made listeners even more excited was when she… END_OF_DOCUMENT_TOKEN_TO_BE_REPLACED

Research in Britain has deduced that there are a total of six “general” classifications of COVID-19 symptoms. The research, originally published in June of 2020, has revealed that the symptoms of COVID-19 can be generalized into six different categories. This is based on the data collected from a symptom tracking app. It has been widely proven… END_OF_DOCUMENT_TOKEN_TO_BE_REPLACED