When Ubisoft announced that the Wii U exclusive Rayman Legends was being delayed in order to port the title to other consoles, fans were understandably upset by the news. Although the company attempted to calm the waters by releasing a new demo strictly for Nintendo fans, this apparently didn’t take the sting out of what they felt was a betrayal.

Even Rayman creator Michel Ancel is unhappy about the decision. In order to express his feelings on the subject, Ancel posted the picture you see below on his official Facebook page. When translated into English, his sign reads: “Release Rayman, Support Ubisoft Montpellier.”

Even Rayman is pleading for the game’s release. In the post being held by Ancel in the photo, he is saying “please.”

While reports suggest that Rayman Legends for the Wii U is already in the proverbial can, it would seem that Ubisoft wants to release every version of the game at the exact same time. Since some folks purchased the new Nintendo console simply to enjoy the upcoming sequel, lots of fans are extremely unhappy about the decision.

It’s currently believed that Ubisoft will drop Rayman Legends onto retail shelves at some point towards the end of the summer. The company seems to think it will be ready to go by September, though anything could happen between now and then. 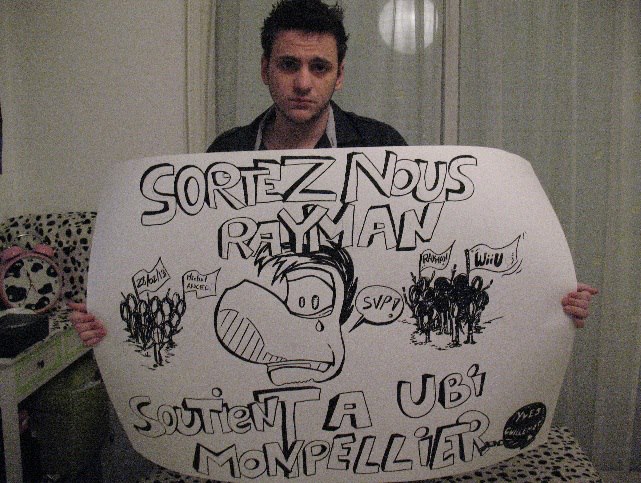