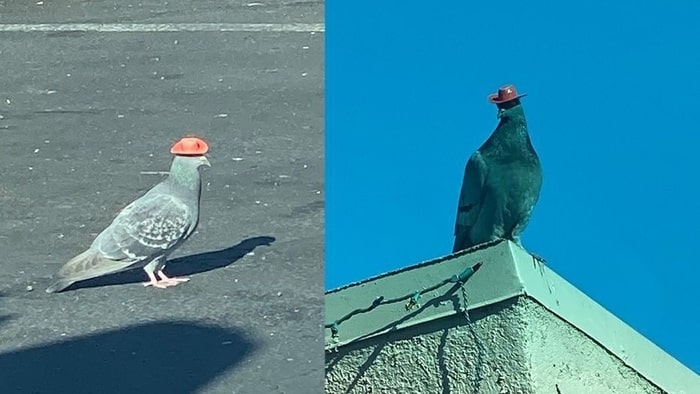 Someone has been donning Las Vegas pigeons with tiny cowboy hats, and while you may be perplexed, one local has an explanation: “the rodeo is in town.”

That’s what Robert Lee said when asked by reporters about the pigeons he filmed wearing mini cowboy hats. “That’s the only explanation I have,” stated Lee. “I saw something red on the pigeon’s head and looked down to these awesome things.” Reportedly, Lofty Hopes, a local animal rescue and pigeon advocacy organization has gravest concerns about the negative effects the lids will have on the pigeons.

“At first, I was like, oh my God that’s cute!” Mariah Hillman said to reporters. “Then, I was like, wait a minute – how did they get those hats on there?” Hillman is the head of the animal advocacy organization, who bares the slogan, “a pigeon positive movement.” While the identity of the individual slapping hats on the pigeon remains undetermined, Hillman noted her group is on an expedition to track down the fowls and remove their hats.

“Did they glue them on? And what does that mean for them?” said Hillman. “Is it something that’s going to impede their flight or attract predators?“ Lofty Hopes posted a video on their Facebook page on Tuesday of several pigeons rocking the cowboy hats, asking any person who has spotted any to phone the number featured on their page.

Anything can go down in Las Vegas – you can win a million dollar jackpot, you can see a breathtaking show, or you could wind up seeing some pigeons attired in Toy Story cowboy hats. Ya gotta love Sin City.