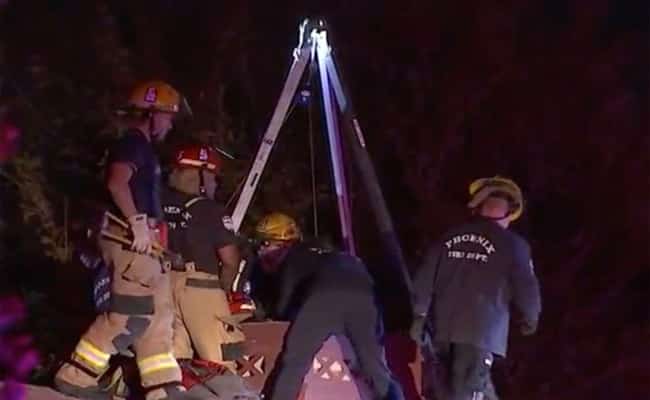 A teen from Arizona who attempted to shimmy down her chimney in an effort to sneak home after a late night out wound up getting stuck, according to reports.

The teen felt the smokestack would be the best entryway to her house after she and her pal, identified as Yasmeen only, got locked out Sunday night and could not locate another way inside, reports say. However, the plot backfired badly. “She was panicking,” Yasmeen informed reporters. “She was, like, ‘call 911!’ She couldn’t breathe.”

The teenager screamed dreadfully for help the whole time, Yasmeen stated. “I didn’t know it was blocked in the bottom,” she explained to news outlets. “I never thought it was blocked on the bottom, so she went down and she started freaking out.” Crews hoisted up a tripod on top of the chimney and struggled to lift the girl out, accordant to various reports.

The Arizona teenager was cloaked in soot when she was freed finally but turned away medical attention. She chuckled after she was rescued, and refused to be interviewed by news outlets. “I don’t know what we were thinking,” Yasmeen stressed to news reporters. The teen’s parents scrambled home from the movie theater and were “really mad,” she furthered.

This story is light, although, don’t get it misconstrued – chimneys are death traps. For instance: Back in 2010, a physician named Jacquelyn Kotarac attempted to break into her on-again-off-again boyfriend’s home while he was there. Whilst the boyfriend was sneaking out a backdoor “to avoid confrontation,” the doctor made the grim decision to go down the chimney. Three days later, a house-guest detected the telltale scent of another chimney fatality.