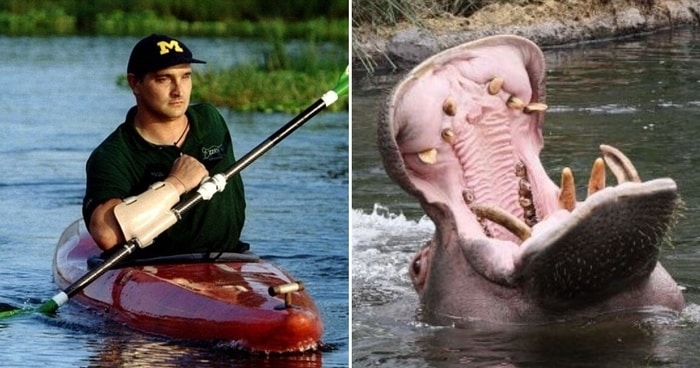 A man who narrowly survived being swallowed by a hippopotamus has opened up about the death-defying ordeal, in which he forfeited an arm.

Paul Templer wound up face-to-face with a peeved hippo and survived, in spite of being swallowed three times. He was in Zimbabwe working as a tourist guide, where with travelers he had ventured out on the water hundreds of times hoping to snag a glimpse of the region’s wildlife. However, one day whilst out in a canoe near Victoria Falls, things went went terribly wrong.

Speaking to reporters, Templer said: “I was out with three fellow guides and some tourists when we came across a group of hippos in the water. They weren’t too close by – and while I felt a bit of apprehension, I believed we were on a safe route. However, suddenly I heard a huge splash and a crashing sound and I saw that a hippo had hit one of the other canoes. The boat flipped out of the water and into the hippo’s back – in doing so, my colleague was thrown into the water.

“There were some rocks nearby and I shouted to my nearest colleague to take everyone back there to safety. Then I went off to try and find the other guide. I was paddling over to my colleague. When I saw the hippo coming towards me under water – it was like a submarine torpedo as it made its way towards my canoe. Suddenly, everything went dark and quiet and it took a few seconds for me to realize what had happened. From the waist up I felt like I wasn’t really wet, but I wasn’t really dry. I could feel a sort of pressure on my lower back and with one of my arms I could feel around, and I felt bristles.”

He added: “Immediately what went through my mind was, ‘At least I know I’m not in a crocodile,’ and then my next thought was, ‘I need to get out.’ The hippo began to shake me around, while I struggling to get away. Then, the hippo spat me out. As I made my way to the surface, I spotted the other guide, who I had been trying to save, and we swam away.” As they frantically tried to get back to land, the hippo returned and attempted again, this time swallowing Templer feet first.

Templer was too desperately fighting not to drown as the hippo plunged him into the water – but luckily, it spat him out once more. At this point, the animal seemed to be determined. Templer recalled it ‘charged at him with its mouth open’ and then snatched him by the torso. “It all seemed like slow motion,” he remembered. “I thought he was going to bite me in half and I saw my blood mixing with the water and I remember thinking, ‘Will I bleed to death or will I drown?’ I felt very detached – like nothing I did would have any effect.” Although Templer survived, with life-threatening injuries, sadly his colleague lost his life.

How did he die? An African American man, George Floyd, 46, was killed by Minneapolis Police officers. Floyd was being investigated for forgery. George Floyd’s death was caused by a police officer holding him down on the ground with a knee on his neck. He was not shot to death but instead strangulated. Now, his family… END_OF_DOCUMENT_TOKEN_TO_BE_REPLACED

The Blood Test, The Swab Test, and The Saliva Test      Essentially, there are three general types of COVID-19 testing produced so far. One is the rapid test, the second is the saliva test and the other is the swab test. The rapid test (also known as the anti-body test) uses blood samples. The swab test… END_OF_DOCUMENT_TOKEN_TO_BE_REPLACED

The COVID-19 pandemic is one of the biggest modern pandemics known in history. Currently, there are more than five million confirmed cases in the world, with a total of 333,000 deaths. A total of 1.6 million of these confirmed cases are in the US alone. The world is currently in a race of finding a… END_OF_DOCUMENT_TOKEN_TO_BE_REPLACED

Despite concrete data and research, people’s opinions will always be diverse when it comes to a variety of topics including religion, politics, gender, and more. Denial is a common reaction to many important discussions and serious world events. The COVID-19 pandemic does not differ from any issues and is subject to opinions from critiques all… END_OF_DOCUMENT_TOKEN_TO_BE_REPLACED

Back in January, when the Wuhan, China coronavirus broke out, it didn’t make it to the front page of newspapers, in print or virtual form. Today, January feels like a lifetime away. Like it or not, people around the world have adapted to the new normal – staying at home, frequent hand washing, and social… END_OF_DOCUMENT_TOKEN_TO_BE_REPLACED

Since the beginning of the year 2020, the whole world has been stupefied by the rapid spread of a deadly coronavirus known as COVID-19. World superpowers in the West were unable to prevent the virus from reaching their borders. Because of this fact, the novel coronavirus COVID-19 became a world-wide pandemic no less than three… END_OF_DOCUMENT_TOKEN_TO_BE_REPLACED