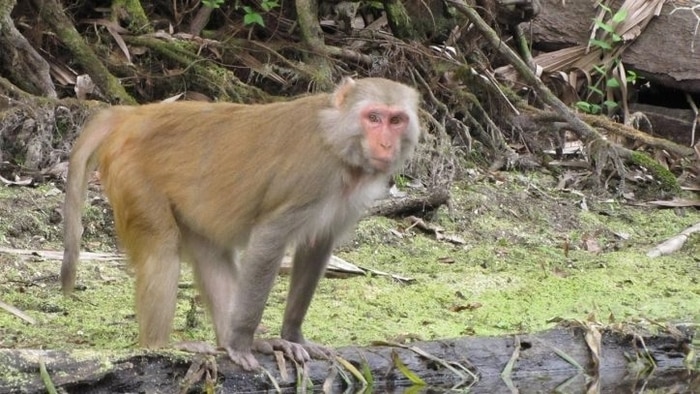 A kayaker shot a video on Oct. 29 and recently shared it online of a pack of monkeys at Silver Springs State Park doing cannonballs into the Silver River.

Rod Guynn, the kayaker and videographer, said he was told fellow kayakers on the river were spotting monkeys in the trees. “Normally, you’ll see, in the trees or in the banks, you’ll see a few. If you counted the monkeys you see, you’ll see two to 10. I haven’t normally seen a really large number together,” he stated.

Guynn claimed he never witnessed a group of 20+ monkeys all at once. He explained he began to hear thunderous smacking noises in the body of water. “When I turned around the corner, I saw a monkey belly-flop into the water,” he expressed. The video he shot exhibits several monkeys plopping down into the water.

Guynn said the animals were leaping off tree limbs because an assertive monkey was squawking at them. He alleged the monkeys looked afraid. A few of the monkeys came close to his kayak, he noted. He said he feels the monkeys were moving the group systemically across the river. “It never occurred to me to be scared. I think I was just a guy floating by in a kayak. I don’t think they even paid attention to me.”

As seems prudent for a mammal that spends a great deal of time over water, Florida monkeys are swell divers and swimmers. Their toes and fingers are partially webbed. They both hop into water when menaced, and swim across rivers and channels and when needing to relocate to new areas.

Video: Wild Monkeys Have A ‘Birthday Picnic’ In Town’s Center

The Blood Test, The Swab Test, and The Saliva Test      Essentially, there are three general types of COVID-19 testing produced so far. One is the rapid test, the second is the saliva test and the other is the swab test. The rapid test (also known as the anti-body test) uses blood samples. The swab test… END_OF_DOCUMENT_TOKEN_TO_BE_REPLACED

The COVID-19 pandemic is one of the biggest modern pandemics known in history. Currently, there are more than five million confirmed cases in the world, with a total of 333,000 deaths. A total of 1.6 million of these confirmed cases are in the US alone. The world is currently in a race of finding a… END_OF_DOCUMENT_TOKEN_TO_BE_REPLACED

Despite concrete data and research, people’s opinions will always be diverse when it comes to a variety of topics including religion, politics, gender, and more. Denial is a common reaction to many important discussions and serious world events. The COVID-19 pandemic does not differ from any issues and is subject to opinions from critiques all… END_OF_DOCUMENT_TOKEN_TO_BE_REPLACED

Back in January, when the Wuhan, China coronavirus broke out, it didn’t make it to the front page of newspapers, in print or virtual form. Today, January feels like a lifetime away. Like it or not, people around the world have adapted to the new normal – staying at home, frequent hand washing, and social… END_OF_DOCUMENT_TOKEN_TO_BE_REPLACED

Since the beginning of the year 2020, the whole world has been stupefied by the rapid spread of a deadly coronavirus known as COVID-19. World superpowers in the West were unable to prevent the virus from reaching their borders. Because of this fact, the novel coronavirus COVID-19 became a world-wide pandemic no less than three… END_OF_DOCUMENT_TOKEN_TO_BE_REPLACED

For months since the start of 2020, the attention of the world has focused on immediate response efforts to contain and combat the novel coronavirus, also known as COVID-19. The deadly virus has pushed millions of people into isolation.  This kept people in their homes for weeks and months away from their work, their friends,… END_OF_DOCUMENT_TOKEN_TO_BE_REPLACED