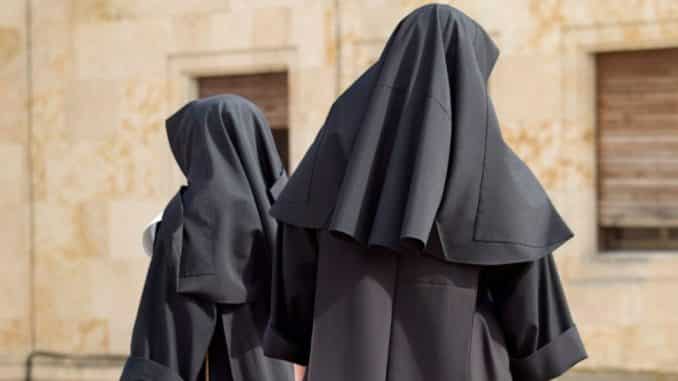 Two nuns are being intensely probed by the Roman Catholic Church after they turned up with buns-in-the-oven during missionary trips.

The women, who are from separate orders in Sicily, got pregnant reportedly while on different expeditions to their home country. One of the two nuns, a 33-year-old based at a convent in Militello Rosmarino, in Messina, found out she was pregnant after visiting a hospital with extreme abdominal pains, local news media outlets reports.

The other nun, a mother superior taking care of elderly persons in the southeastern city of Ispica, in Ragusa, has too discovered she is knocked up. Mayor of Militello Rosmarino, Salvatore Riotta, stated he knows one of the nuns “well” and “regretted” how the news had been leaked. He informed reporters: “There is regret for what happened. Our community of 1,200 inhabitants is baffled by the way some have treated the news, not as secretly as it should have been.”

The mayor furthered that less than a year ago the nun had taken her vows and was adored by everyone. Ruggero Razza, Sicily’s health councilor, said he would commence an internal investigation to pinpoint how the pregnancies became knowledge to the public. In a Facebook post he added: “I wish to express my solidarity first of all to them and to their respective orders. I find it unfair that news that should have remained in the privacy of health facilities has become public knowledge.”

The mothers-to-be will be able to select whether to depart the Order and raise their kids, accordant to reports. The 33-year-old nun has been relocated to a different abbey in Palermo, whilst the mother superior, believed to be roughly one month pregnant, went back home to Madagascar.

Gift-giving isn’t just a seasonal affair between friends, families and acquaintances. The art of gift-giving is also conducted on a national scale with countries often sending each other big, weird and expensive gifts. Experts in all things gifts, Vanilla Reindeer put together some examples of these expensive and odd gifts that have been shared between… END_OF_DOCUMENT_TOKEN_TO_BE_REPLACED

There are lots of ways you can make Pres. Trump feel welcome: you can offer him coffee, or mow a penis into a field for him to view as his plane lands. The willie in question has been chopped by Born Eco ahead of the arrival of President Trump, who visited the UK Monday for… END_OF_DOCUMENT_TOKEN_TO_BE_REPLACED

The year isn’t even halfway over, yet Donald Trump has managed to make a fool of himself and our country countless times. From inviting the national college football champions, the Clemson Tigers, all the way to the White House for some McDonald’s to his to the dreaded results of Mueller’s investigation, it has been one… END_OF_DOCUMENT_TOKEN_TO_BE_REPLACED

Republicans have always said that when they gained control in Congress, they would work to overturn Roe v. Wade and here they are, cashing in on that promise one state at a time. So far, Alabama, Arkansas, Georgia, Kentucky, Missouri, and Ohio have all passed incredibly restrictive laws on abortions, making it illegal for women… END_OF_DOCUMENT_TOKEN_TO_BE_REPLACED

If you’re on Snapchat, then you’ve probably played around with (and were likely horrified by) their filter gender swap filters. While you’re probably using these filters to send hilarious pics to your friends, some guys using them to create Tinder profiles. What likely started out as a joke has quickly evolved, and these guys are… END_OF_DOCUMENT_TOKEN_TO_BE_REPLACED

“Milkshaking” is a hilarious trend in Britain where a milkshake is thrown at and ideally lands on a far-right politician or activist. The point of this nonviolence protest is to humiliate them without causing injury. Physical injury at least. There’s no doubt that milkshaking has led to a few bruised egos. Not only is this… END_OF_DOCUMENT_TOKEN_TO_BE_REPLACED