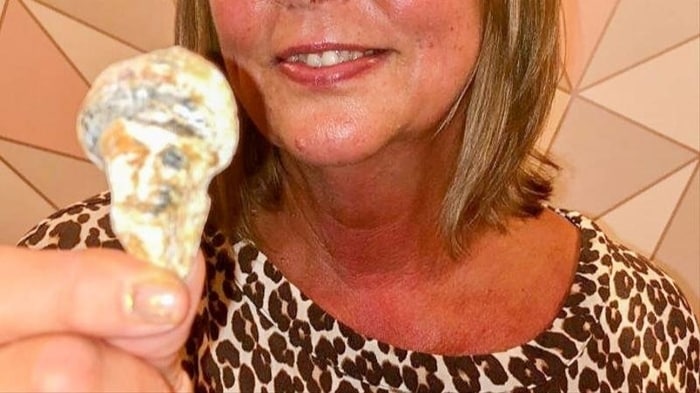 A woman has stumbled upon a seashell that bears a dramatic resemblance to the notorious al-Qaeda terrorist leader Osama bin Laden.

This providential find was made by 60-year-old Debra Oliver on Winchelsea Beach. She and her spouse Martin, 62, were on a scenic walk on the beach when they unearthed the contentious Islamist leader’s similitude on a shell. During their stroll, one shell in particular caught her eye. Debra stated that she was ‘drawn to the curious looking’ shell and headed to retrieve it. After making the nonsensical find, Martin and Debra ‘fell apart laughing’ and chose to hold onto the shell ‘as a little memento’. She furthered that locating a shell that looks like Osama bin Laden specifically is ‘funny’, making a point: “He was buried at sea, too.” “It’s not that often you find a seashell that looks like anyone at all, so finding Osama bin Laden was amazing,” she continued.

“We’d all gone for a walk on the beach, which is covered in millions and millions of shells and pebbles. I was drawn to this curious-looking shell, and went to pick it up. When I looked at it properly up close, I thought it looked like Jesus. I then saw a turban on the top, and realized who was staring up at me in the palm of my hand – Osama bin Laden.” Osama bin Laden is best known for his part in masterminding the September 11, 2001 hi-jacking attacks on America. Roughly 3,000 people were killed on 9/11 and the USA then unveiled retaliatory attacks. Bin Laden eluded the grasp of the US armed forces for ten years until he was shot and killed on May 2, 2011 at a compound in Abbottabad, Pakistan.

The Blood Test, The Swab Test, and The Saliva Test      Essentially, there are three general types of COVID-19 testing produced so far. One is the rapid test, the second is the saliva test and the other is the swab test. The rapid test (also known as the anti-body test) uses blood samples. The swab test… END_OF_DOCUMENT_TOKEN_TO_BE_REPLACED

The COVID-19 pandemic is one of the biggest modern pandemics known in history. Currently, there are more than five million confirmed cases in the world, with a total of 333,000 deaths. A total of 1.6 million of these confirmed cases are in the US alone. The world is currently in a race of finding a… END_OF_DOCUMENT_TOKEN_TO_BE_REPLACED

Despite concrete data and research, people’s opinions will always be diverse when it comes to a variety of topics including religion, politics, gender, and more. Denial is a common reaction to many important discussions and serious world events. The COVID-19 pandemic does not differ from any issues and is subject to opinions from critiques all… END_OF_DOCUMENT_TOKEN_TO_BE_REPLACED

Back in January, when the Wuhan, China coronavirus broke out, it didn’t make it to the front page of newspapers, in print or virtual form. Today, January feels like a lifetime away. Like it or not, people around the world have adapted to the new normal – staying at home, frequent hand washing, and social… END_OF_DOCUMENT_TOKEN_TO_BE_REPLACED

Since the beginning of the year 2020, the whole world has been stupefied by the rapid spread of a deadly coronavirus known as COVID-19. World superpowers in the West were unable to prevent the virus from reaching their borders. Because of this fact, the novel coronavirus COVID-19 became a world-wide pandemic no less than three… END_OF_DOCUMENT_TOKEN_TO_BE_REPLACED

For months since the start of 2020, the attention of the world has focused on immediate response efforts to contain and combat the novel coronavirus, also known as COVID-19. The deadly virus has pushed millions of people into isolation.  This kept people in their homes for weeks and months away from their work, their friends,… END_OF_DOCUMENT_TOKEN_TO_BE_REPLACED