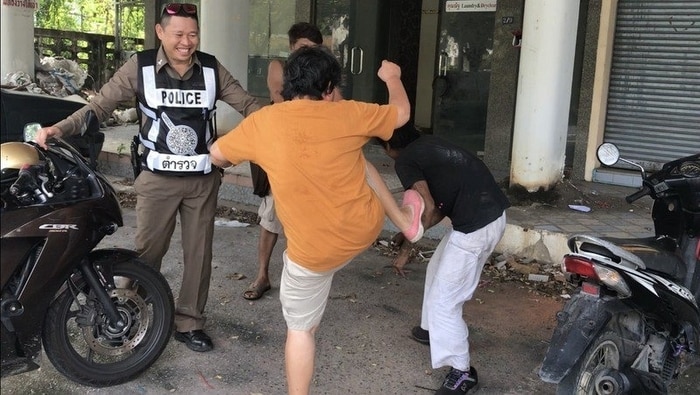 A man busted stealing electrical cable in a renovated building revealed he masturbated after viewing the building’s owner walk by and she flipped out.

Wassana Songsri-in kicked the bandit, 30-year-old Somchai Jiummuanthia, twice on digesting the confession. She snatched up a steel bar to strike Jiummuanthia, but the cops stopped her before more injury was caused. Ms. Songsri-in phoned law enforcement at 10am to report that a burglar was inside her building. The officers detected a Honda Click motorbike with no license plate parked in front of the building, explained Capt Wetchasak. On invading the building police found a plethora of electrical cables that had been cut and discovered Jiummuanthia strolling down the stairs inside the building. The cops took Jiummuanthia for questioning and verified that he was the person caught on CCTV heisting the electrical cables. Faced with the evidence, Jiummuanthia confessed to boosting the cables.

He too expressed that while he was lifting the cable, he spotted some woman wander past the construction, so he masturbated and then stepped out to trade the cable. The female that walked by was Ms. Songsri-in. “I used the building as an apartment block, then a laundry shop, and now I am renovating it to be a hotel. The front door to the building was locked, so the thief must have entered the building by walking past my house,” Ms. Songsri-in explained to police. “I have CCTV footage showing Somchai walking out of the building carrying a sack filled with cables. I tried to find this thief for a long time, and today he came back again and was finally caught.”

Trump is the First American President who gets impeached for the second time. Trump’s second impeachment became a trending topic on Twitter after the terrifying terrorist attack on Capitol Hill on the 6th of January. Twitter is at it again, being flooded with memes and Twitter jokes surrounding Trump’s second impeachment trial. Americans are trying to… END_OF_DOCUMENT_TOKEN_TO_BE_REPLACED

Twitter thoughts about the Capitol Riots posted by millions of Americans on the platform is a great read. Readers always get to see the two sides of a story. They get to learn what truly happened, what is the current development on the situation, and more. In this case, humor is always an easy defense. Many… END_OF_DOCUMENT_TOKEN_TO_BE_REPLACED