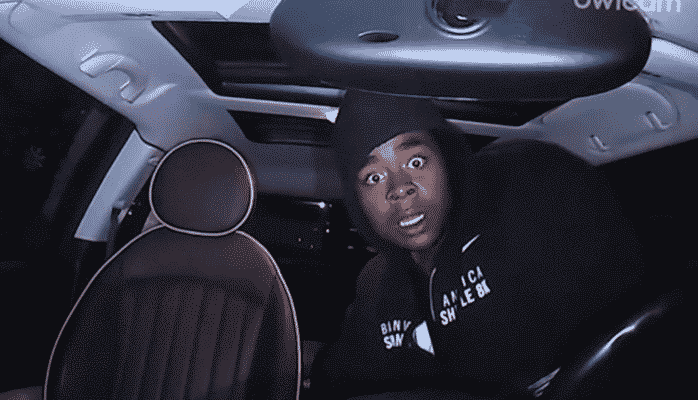 A man was rummaging through a Mini, when he was snapped by its motion-activated dashcam, approx ten seconds after he had entered the vehicle.

As you may have figured from his expression, the criminal didn’t hang around after that and exited without stealing anything. The Mini’s owner – who wishes to remain faceless – is understandably gobsmacked with the dashcam, which extremely and effectively served its purpose. Though, while she wished it would blanket her with a sense of security, she never thought in a million years it would manufacture such comedy too. Speaking to local news, she stated: “It starts recording without any light as soon as the motion happens, but after 10 seconds, the light comes on and he was startled by that. Nothing was missing, but you could see someone had gone through my car. I am totally happy I bought that camera. It’s worth every penny.

I just kept playing back the video cause it was just so funny. I’m just glad that it’s getting the attention that it’s getting.” Law enforcement is still attempting to trace the man, but you’d have to think with such a clear shot of the suspect’s face having gone viral, the Mini menace has the odds stacked against him. Dashcams have pioneered the way road-based incidents and crimes are assessed, lessening the frequency with which events boil down to one individual’s word against another’s. In late 2018, a dashcam in Norfolk caught the astonishing moment a van straight drove over a roundabout and soared 12ft into the air.

Burglar Throws Rock At Bulletproof Glass, Gets Hit In The Face [Video]

Ex-Con Sticks Up Two Banks Armed With An Avocado

Gift-giving isn’t just a seasonal affair between friends, families and acquaintances. The art of gift-giving is also conducted on a national scale with countries often sending each other big, weird and expensive gifts. Experts in all things gifts, Vanilla Reindeer put together some examples of these expensive and odd gifts that have been shared between… END_OF_DOCUMENT_TOKEN_TO_BE_REPLACED

There are lots of ways you can make Pres. Trump feel welcome: you can offer him coffee, or mow a penis into a field for him to view as his plane lands. The willie in question has been chopped by Born Eco ahead of the arrival of President Trump, who visited the UK Monday for… END_OF_DOCUMENT_TOKEN_TO_BE_REPLACED

The year isn’t even halfway over, yet Donald Trump has managed to make a fool of himself and our country countless times. From inviting the national college football champions, the Clemson Tigers, all the way to the White House for some McDonald’s to his to the dreaded results of Mueller’s investigation, it has been one… END_OF_DOCUMENT_TOKEN_TO_BE_REPLACED

Republicans have always said that when they gained control in Congress, they would work to overturn Roe v. Wade and here they are, cashing in on that promise one state at a time. So far, Alabama, Arkansas, Georgia, Kentucky, Missouri, and Ohio have all passed incredibly restrictive laws on abortions, making it illegal for women… END_OF_DOCUMENT_TOKEN_TO_BE_REPLACED

If you’re on Snapchat, then you’ve probably played around with (and were likely horrified by) their filter gender swap filters. While you’re probably using these filters to send hilarious pics to your friends, some guys using them to create Tinder profiles. What likely started out as a joke has quickly evolved, and these guys are… END_OF_DOCUMENT_TOKEN_TO_BE_REPLACED

“Milkshaking” is a hilarious trend in Britain where a milkshake is thrown at and ideally lands on a far-right politician or activist. The point of this nonviolence protest is to humiliate them without causing injury. Physical injury at least. There’s no doubt that milkshaking has led to a few bruised egos. Not only is this… END_OF_DOCUMENT_TOKEN_TO_BE_REPLACED