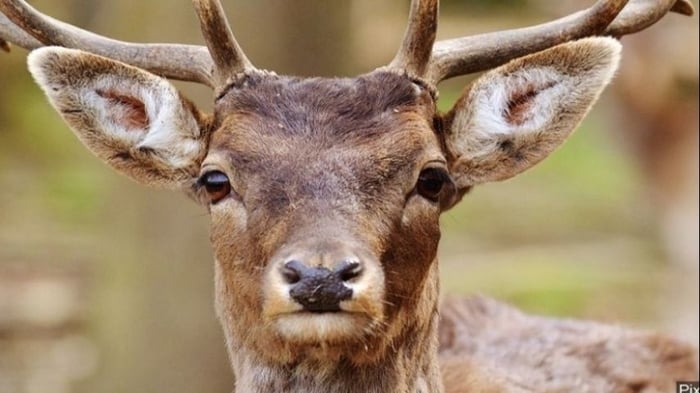 A woman in Georgia went to put gas in her tank before work Friday morning when the unanticipated happened: she got drop kicked by a deer.

Lynda Tennent told reporters she was pumping fuel in Brunswick when a deer pounced over her head, simultaneously kicking her in the path. “I thought I was being robbed,” stated Tennent. “I reached up and grabbed my head… I thought I was bleeding.” The hoof struck her when she wasn’t looking, catching her by total surprise. She stood there for a second to take in what occurred. Despite the painful event, she told local news she was still in high spirits. “You know the funny thing? I was just worried I was going to be late for work.” Tennent noted the deer sprinted off. Now she has a tale to share with her coworkers.

If you encounter a deer (at a gas station or anywhere!) and it begins to change its ear posture or stance, or starts to stomp its huff or feet, slowly and steadily back away from it. If you got too near and it begins to approach you, wave a jacket or other item in the deer’s direction or utilize it to make yourself seem larger, yell at the animal, and make a plethora of loud noises whilst you attempt to back away. DO NOT turn your back on the deer. If it charges at you, put an object between you and the animal, particularly if it’s a buck. A large stick, backpack, or a rock may prevent you from getting stuck. Carry on with trying to depart the area, or climb a tree nearby or some other tall spot so that the deer can’t reach you. Providing the deer knocks you down, curl up asap into the fetal position and diligently protect your head, neck and vital organs.

To see the deer kick the lady – click HERE.

Guy Offers $6,361 Reward To Whoever Identifies Person Who Kicked His Cat

Gift-giving isn’t just a seasonal affair between friends, families and acquaintances. The art of gift-giving is also conducted on a national scale with countries often sending each other big, weird and expensive gifts. Experts in all things gifts, Vanilla Reindeer put together some examples of these expensive and odd gifts that have been shared between… END_OF_DOCUMENT_TOKEN_TO_BE_REPLACED

There are lots of ways you can make Pres. Trump feel welcome: you can offer him coffee, or mow a penis into a field for him to view as his plane lands. The willie in question has been chopped by Born Eco ahead of the arrival of President Trump, who visited the UK Monday for… END_OF_DOCUMENT_TOKEN_TO_BE_REPLACED

The year isn’t even halfway over, yet Donald Trump has managed to make a fool of himself and our country countless times. From inviting the national college football champions, the Clemson Tigers, all the way to the White House for some McDonald’s to his to the dreaded results of Mueller’s investigation, it has been one… END_OF_DOCUMENT_TOKEN_TO_BE_REPLACED

Republicans have always said that when they gained control in Congress, they would work to overturn Roe v. Wade and here they are, cashing in on that promise one state at a time. So far, Alabama, Arkansas, Georgia, Kentucky, Missouri, and Ohio have all passed incredibly restrictive laws on abortions, making it illegal for women… END_OF_DOCUMENT_TOKEN_TO_BE_REPLACED

If you’re on Snapchat, then you’ve probably played around with (and were likely horrified by) their filter gender swap filters. While you’re probably using these filters to send hilarious pics to your friends, some guys using them to create Tinder profiles. What likely started out as a joke has quickly evolved, and these guys are… END_OF_DOCUMENT_TOKEN_TO_BE_REPLACED

“Milkshaking” is a hilarious trend in Britain where a milkshake is thrown at and ideally lands on a far-right politician or activist. The point of this nonviolence protest is to humiliate them without causing injury. Physical injury at least. There’s no doubt that milkshaking has led to a few bruised egos. Not only is this… END_OF_DOCUMENT_TOKEN_TO_BE_REPLACED