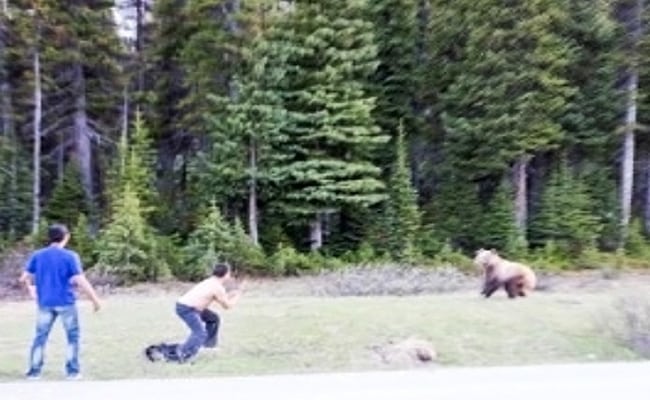 Devin Mitsuing got out of his vehicle shirtless and started shouting at a grizzly bear while in a “boxing stance” before charging at it, accordant to a witness.

Caught on tape by a pair of nearby photographers, who were snapping images of the lone ambling grizzly on Highway 93 and promptly called RCMP. Mitsuing was later located by a Park Warden and charged for disturbing wildlife in a national park, under the National Parks Act. In court, the case finally came to trial Wednesday (Sept. 18) morning with Judge George Gaschler determining the Saskatchewan man guilty and levying a $4,000 fine. “It is abundantly clear this is a disturbance of a grizzly bear and I find [Mr. Mitsuing] guilty,” said Judge Gaschler. Thomas Murray O’Neill, British Columbia photographer, explained: “We were on the other side of the highway when a truck pulled up and two gentlemen got out, started yelling at the bear and throwing rocks … then he took off his shirt and got in a boxing stance.”

It was ruled Mitsuing has until Oct. 16 to pay the fine, or go to jail for 33 days. “I think the judge said it best, when an individual creates this kind of dangerous situation with a bear, when they charge at him, when they throw rocks at him when they cause him to run into the bush, you are going to create an aggressive animal that obviously has the ability to do a lot of harm to humans and the public in general,” Federal Crown prosecutor Jeremy Newton said after the trial. “Mr. Mitsuing wasn’t just putting himself in danger, he putting every other person who comes across this bear in danger in the future, so a large fine is a strong message to other individuals who, for whatever reason, would think to engage in this kind of behavior you would hope they wouldn’t but it should be even more obvious now.”

The US arms sale industry is large and successful. More than 30% of exported weapons in the world come from the United States. They supply to no less than 90 nations making it one of the largest suppliers of weapons in the world. The US makes an estimate of almost 200 Billion dollars in annual… END_OF_DOCUMENT_TOKEN_TO_BE_REPLACED

Now that the election results are almost final, we all want to ask what’s going to happen to Donald Trump after leaving the office? All US Presidents inevitably reach the point where they leave the White House.  Besides, the constitution states that all US Presidents are subject to a two-term limit. What do former presidents… END_OF_DOCUMENT_TOKEN_TO_BE_REPLACED

This is the first time in modern history that the US held presidential elections in the middle of a pandemic. In truth, the US elections may have overshadowed COVID-19 and the side effects are limitless. America is facing a tough crisis of discontentment with the current administration. An understandable case but a situation that may… END_OF_DOCUMENT_TOKEN_TO_BE_REPLACED