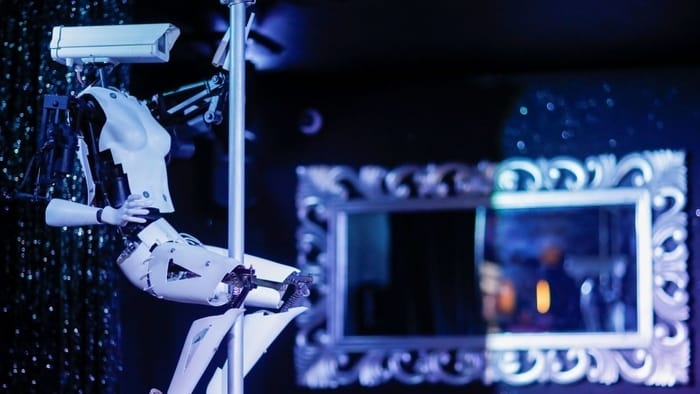 Two robot pole dancers, lidded with a CCTV camera for a head and wearing high heels, will debut at the SC-Club to commemorate its fifth anniversary.

Artificial intelligence and robots has long been hailed as a substitute for humans carrying out jobs around the globe. Though, robots are seldom thought of as exotic dancers in nightclubs – therefore that is exactly what is occurring in Nantes. The machines were the brainchild of Giles Walker, who has superimposed their metallic bodies with components from plastic mannequins. He came up with the ideo a decade ago, and has loaned out and toured the robots over the past couple years. Noting their CCTV camera heads, he explained the robots geared to “play with the notion of voyeurism”, presenting the inquiry of “who has the power between the voyeur and the observed person”. Despite the spike of robot work forces, establishment owner Laurent Roue stated the new staff members will not replace the 11 human dancers who presently perform there.

He remarked: “For us, it’s a wink, a homage in a way to robotics. We need something human, warmth, physical contact, and this is really putting together opposites.” He furthered: “To each his own.” A performer at the club (dubbed as Lexi) pledged that the future is human at the site, claiming: “They won’t really change our sector. They won’t replace us. We’re not in a vulgar job. It’s an artistic job. It’s something that’s beautiful, and robots won’t change that.”

To see the robot pole dancers in action, click HERE.

How did he die? An African American man, George Floyd, 46, was killed by Minneapolis Police officers. Floyd was being investigated for forgery. George Floyd’s death was caused by a police officer holding him down on the ground with a knee on his neck. He was not shot to death but instead strangulated. Now, his family… END_OF_DOCUMENT_TOKEN_TO_BE_REPLACED

The Blood Test, The Swab Test, and The Saliva Test      Essentially, there are three general types of COVID-19 testing produced so far. One is the rapid test, the second is the saliva test and the other is the swab test. The rapid test (also known as the anti-body test) uses blood samples. The swab test… END_OF_DOCUMENT_TOKEN_TO_BE_REPLACED

The COVID-19 pandemic is one of the biggest modern pandemics known in history. Currently, there are more than five million confirmed cases in the world, with a total of 333,000 deaths. A total of 1.6 million of these confirmed cases are in the US alone. The world is currently in a race of finding a… END_OF_DOCUMENT_TOKEN_TO_BE_REPLACED

Despite concrete data and research, people’s opinions will always be diverse when it comes to a variety of topics including religion, politics, gender, and more. Denial is a common reaction to many important discussions and serious world events. The COVID-19 pandemic does not differ from any issues and is subject to opinions from critiques all… END_OF_DOCUMENT_TOKEN_TO_BE_REPLACED

Back in January, when the Wuhan, China coronavirus broke out, it didn’t make it to the front page of newspapers, in print or virtual form. Today, January feels like a lifetime away. Like it or not, people around the world have adapted to the new normal – staying at home, frequent hand washing, and social… END_OF_DOCUMENT_TOKEN_TO_BE_REPLACED

Since the beginning of the year 2020, the whole world has been stupefied by the rapid spread of a deadly coronavirus known as COVID-19. World superpowers in the West were unable to prevent the virus from reaching their borders. Because of this fact, the novel coronavirus COVID-19 became a world-wide pandemic no less than three… END_OF_DOCUMENT_TOKEN_TO_BE_REPLACED