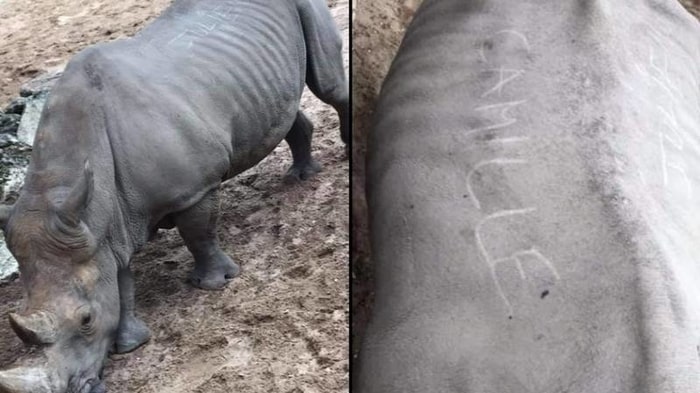 In France, two visitors have abominably etched their names into a rhino’s back in a zoo, fueling revulsion around the world.

The 35-year-old rhino was spotted with the names Julien and Camille scraped into its skin, at the La Palmyre zoo. Pierre Caille, Director of the zoo, stated that the rhino, named Noelle, had the words engraved into her back in mud and a layer of dead skin. In a Facebook post shared by the zoo, owners expressed how the managers at the park were ‘obviously outraged by the stupidity’ of the persons. “When the rhinos are against the wall, visitors actually have the opportunity to touch the skin of their back and the vast majority do it with respect. We believe that being able to approach such an animal raises the emotion of the visitor and allows it to raise awareness not only about diversity, but also to the majesty of the living around us.” The zoo’s owner added: “The animal may not even have realized. We quickly brushed the writing away and there was no harm to the animal.”

One Twitter subscriber commented: “French zoo visitors scratch names into rhino’s back: what is wrong with people?” Someone else posted: “What the actual f! It’s bad enough that this poor creature is incarcerated in a zoo then these total s** go and do this to her. Camille & Julien, karma is looking for you, there is no escape.” Another person said simply: “Oh for heavens sake! What’s wrong with you people!!” Another posted: “I’m more concerned about the weight and health of the rhino, why does he/she look so skinny?” To which the zoo replied: “Our rhinos have alfalfa available throughout the day and get a supplement of pellets, apples and carrots (and alfalfa again) in the evening. This rhino is 35 y.o. (so not a young individual) and is indeed thinner than the others, but he’s doing well. The health of our animals is of course our priority and we take action as soon as a problem should occur.”

Dead Animals Lie On The Ground At The Zoo In Tbilisi

Gift-giving isn’t just a seasonal affair between friends, families and acquaintances. The art of gift-giving is also conducted on a national scale with countries often sending each other big, weird and expensive gifts. Experts in all things gifts, Vanilla Reindeer put together some examples of these expensive and odd gifts that have been shared between… END_OF_DOCUMENT_TOKEN_TO_BE_REPLACED

There are lots of ways you can make Pres. Trump feel welcome: you can offer him coffee, or mow a penis into a field for him to view as his plane lands. The willie in question has been chopped by Born Eco ahead of the arrival of President Trump, who visited the UK Monday for… END_OF_DOCUMENT_TOKEN_TO_BE_REPLACED

The year isn’t even halfway over, yet Donald Trump has managed to make a fool of himself and our country countless times. From inviting the national college football champions, the Clemson Tigers, all the way to the White House for some McDonald’s to his to the dreaded results of Mueller’s investigation, it has been one… END_OF_DOCUMENT_TOKEN_TO_BE_REPLACED

Republicans have always said that when they gained control in Congress, they would work to overturn Roe v. Wade and here they are, cashing in on that promise one state at a time. So far, Alabama, Arkansas, Georgia, Kentucky, Missouri, and Ohio have all passed incredibly restrictive laws on abortions, making it illegal for women… END_OF_DOCUMENT_TOKEN_TO_BE_REPLACED

If you’re on Snapchat, then you’ve probably played around with (and were likely horrified by) their filter gender swap filters. While you’re probably using these filters to send hilarious pics to your friends, some guys using them to create Tinder profiles. What likely started out as a joke has quickly evolved, and these guys are… END_OF_DOCUMENT_TOKEN_TO_BE_REPLACED

“Milkshaking” is a hilarious trend in Britain where a milkshake is thrown at and ideally lands on a far-right politician or activist. The point of this nonviolence protest is to humiliate them without causing injury. Physical injury at least. There’s no doubt that milkshaking has led to a few bruised egos. Not only is this… END_OF_DOCUMENT_TOKEN_TO_BE_REPLACED