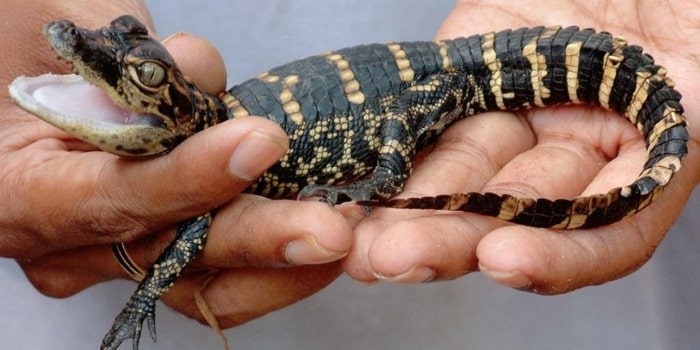 A woman who yanked a gator out of her yoga pants during a traffic stop pled guilty to illegally possessing wild animals and was given probation.

25-year-old Ariel Machan-Le Quire, from Florida, was in the passenger seat of a vehicle pulled over in May for blowing a stop sign in Punta Gorda, said the Charlotte County Sheriff’s Office at the time. Machan-Le Quire, plus the 22-year-old operator Michael Clemons, claimed initially they were attempting to collect frogs and snakes from underneath an overpass. The deputy was granted permission to comb the bags in the trunk and ultimately unearthed 41 three-stripe turtles inside a “Teenage Mutant Ninja Turtle” book bag. When the deputy probed if the pair possessed anything else, Machan-Le Quire snatched a 1-foot alligator out of her yoga pants! She was then arrested.

Machan-Le Quire was charged with possessing more than one turtle per day, transporting more than one turtle or turtle eggs, one count of possessing a softshell turtle and possessing an America alligator, local news outlets reported, citing court records. She was sentenced Monday to 200 hours of community service, six months’ probation, and was told to donate $500 to the Florida Fish and Wildlife Conservation Committee, the government agency that took on the case after the deputy’s discovery, reported the paper. Charges against Clemons are pending.

How did he die? An African American man, George Floyd, 46, was killed by Minneapolis Police officers. Floyd was being investigated for forgery. George Floyd’s death was caused by a police officer holding him down on the ground with a knee on his neck. He was not shot to death but instead strangulated. Now, his family… END_OF_DOCUMENT_TOKEN_TO_BE_REPLACED

The Blood Test, The Swab Test, and The Saliva Test      Essentially, there are three general types of COVID-19 testing produced so far. One is the rapid test, the second is the saliva test and the other is the swab test. The rapid test (also known as the anti-body test) uses blood samples. The swab test… END_OF_DOCUMENT_TOKEN_TO_BE_REPLACED

The COVID-19 pandemic is one of the biggest modern pandemics known in history. Currently, there are more than five million confirmed cases in the world, with a total of 333,000 deaths. A total of 1.6 million of these confirmed cases are in the US alone. The world is currently in a race of finding a… END_OF_DOCUMENT_TOKEN_TO_BE_REPLACED

Despite concrete data and research, people’s opinions will always be diverse when it comes to a variety of topics including religion, politics, gender, and more. Denial is a common reaction to many important discussions and serious world events. The COVID-19 pandemic does not differ from any issues and is subject to opinions from critiques all… END_OF_DOCUMENT_TOKEN_TO_BE_REPLACED

Back in January, when the Wuhan, China coronavirus broke out, it didn’t make it to the front page of newspapers, in print or virtual form. Today, January feels like a lifetime away. Like it or not, people around the world have adapted to the new normal – staying at home, frequent hand washing, and social… END_OF_DOCUMENT_TOKEN_TO_BE_REPLACED

Since the beginning of the year 2020, the whole world has been stupefied by the rapid spread of a deadly coronavirus known as COVID-19. World superpowers in the West were unable to prevent the virus from reaching their borders. Because of this fact, the novel coronavirus COVID-19 became a world-wide pandemic no less than three… END_OF_DOCUMENT_TOKEN_TO_BE_REPLACED