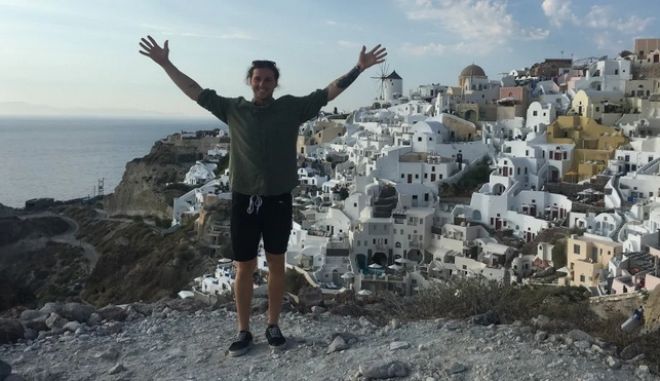 Brendan Beasley, an electrician, was dumped by his girlfriend and holds no regrets about chucking the $5,000 engagement ring into the ocean.

Beasley had spent more than $10K covertly organizing the bae-cation of a lifetime to Greece with the intention of proposing to his long-term girlfriend in quaint Santorini. But, things went left before he got the chance to pop the question, as she ended up breaking up with him. He told local reporters, “After three years together, and for no reason at all … she ended up leaving me. I was gutted because I had actually bought her a ring and booked us a surprise trip to Santorini (to propose) because she always wanted to get engaged there.” He ended up going on the trip anyways – mateless. He initially kept the ring, though then when he caught wind that his ex had gotten with another dude, he desired to simply get rid of the reminder. Beasly went on a Contiki tour to Santorini where ultimately he hurled the ring – and the box too it came in – off a cliff into the Aegean Sea.

Brendan noted, “The moment I threw the ring, a whole lot of weight lifted off my shoulders. I really found myself in Europe after that.” Whilst on the tour, he fatefully met a Canadian girl, whom subsequently he followed to Canada and had a blissful time. After moving back home for a bit to get back into electrical work, Beasley is now considering a move back to Canada with the goal of being with Kassandra, his new squeeze, and potentially work on the oil rigs. He had a plain answer of “No,” when questioned if he regrets flinging the $5,000 ring into the ocean. “I never did,” he added. “It’s worked out better for me.”

Signs That Your Girlfriend Is Cheating On You

The Blood Test, The Swab Test, and The Saliva Test      Essentially, there are three general types of COVID-19 testing produced so far. One is the rapid test, the second is the saliva test and the other is the swab test. The rapid test (also known as the anti-body test) uses blood samples. The swab test… END_OF_DOCUMENT_TOKEN_TO_BE_REPLACED

The COVID-19 pandemic is one of the biggest modern pandemics known in history. Currently, there are more than five million confirmed cases in the world, with a total of 333,000 deaths. A total of 1.6 million of these confirmed cases are in the US alone. The world is currently in a race of finding a… END_OF_DOCUMENT_TOKEN_TO_BE_REPLACED

Despite concrete data and research, people’s opinions will always be diverse when it comes to a variety of topics including religion, politics, gender, and more. Denial is a common reaction to many important discussions and serious world events. The COVID-19 pandemic does not differ from any issues and is subject to opinions from critiques all… END_OF_DOCUMENT_TOKEN_TO_BE_REPLACED

Back in January, when the Wuhan, China coronavirus broke out, it didn’t make it to the front page of newspapers, in print or virtual form. Today, January feels like a lifetime away. Like it or not, people around the world have adapted to the new normal – staying at home, frequent hand washing, and social… END_OF_DOCUMENT_TOKEN_TO_BE_REPLACED

Since the beginning of the year 2020, the whole world has been stupefied by the rapid spread of a deadly coronavirus known as COVID-19. World superpowers in the West were unable to prevent the virus from reaching their borders. Because of this fact, the novel coronavirus COVID-19 became a world-wide pandemic no less than three… END_OF_DOCUMENT_TOKEN_TO_BE_REPLACED

For months since the start of 2020, the attention of the world has focused on immediate response efforts to contain and combat the novel coronavirus, also known as COVID-19. The deadly virus has pushed millions of people into isolation.  This kept people in their homes for weeks and months away from their work, their friends,… END_OF_DOCUMENT_TOKEN_TO_BE_REPLACED