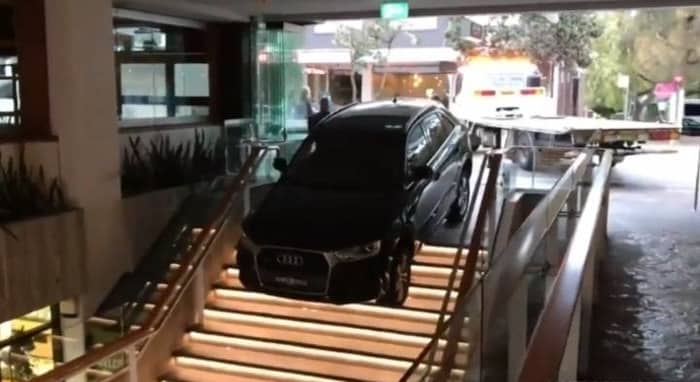 An Uber driver somehow got himself in a bit of a rut after inadvertently driving down a set of stairs whilst attempting to get to a property.

The unidentified driver traveled down a staircase at 6.30am, figuring it was a driveway to adjacent apartments. “I mean it looks like a driveway in, so what happened?” the driver expressed to local news reporters. Left dangling in the balance and not capable of reversing out of the predicament, the operator supplied a bit of a sideshow to the early morning persons leaving for work. “All the wheels were off the floor so he couldn’t reverse,” said witness Oscar Fowler. “He was just flustered.” He furthered: “It was a bit of shock, the bloke was just sitting in his car though. No one got hurt or anything.” Another witness stated: “[He] came out to make some money as an Uber driver, but he’ll be getting an Uber home.” The stairs will require repair after enduring some damage, however according to news outlets, police have declared it’s implausible the Uber driver will face any charges.

The little cars you witness on Uber maps aren’t the ones you’re requesting necessarily; they’re in fact just a graphical representation of the possible vehicles that are out there, and the company instead utilizes ‘best matching’ to connect passengers with drivers, instead of the closest ride to you. Thereby, we hope the driver didn’t exhibit on screen as a stationery auto trapped on a staircase! “Our goal is for the number of cars and their location to be as accurate as possible in real time,” said an Uber spokesperson. “Latency is one reason this is not always possible. Another reason is that the app only shows the nearest eight cars to avoid cluttering the screen. Also, to protect the safety of drivers, in some volatile situations, the app doesn’t show the specific location of individual cars until the ride is requested.”

‘Vomit Fraud’ Is On The Rise In Uber — Will Your Next Trip Cost More?

Uber Is Mocked In ‘Funny Or Die’ Video, Laughable But Awkwardly True [Watch]

For anyone wondering who this MyPillow guy is, this article will tell you all about him and his role in Trump’s last struggle for power. It is almost second nature for the internet to find humor in many serious events in government. Could this be this generation’s way of coping? We don’t really know. Let’s… END_OF_DOCUMENT_TOKEN_TO_BE_REPLACED

Trump is the First American President who gets impeached for the second time. Trump’s second impeachment became a trending topic on Twitter after the terrifying terrorist attack on Capitol Hill on the 6th of January. Twitter is at it again, being flooded with memes and Twitter jokes surrounding Trump’s second impeachment trial. Americans are trying to… END_OF_DOCUMENT_TOKEN_TO_BE_REPLACED