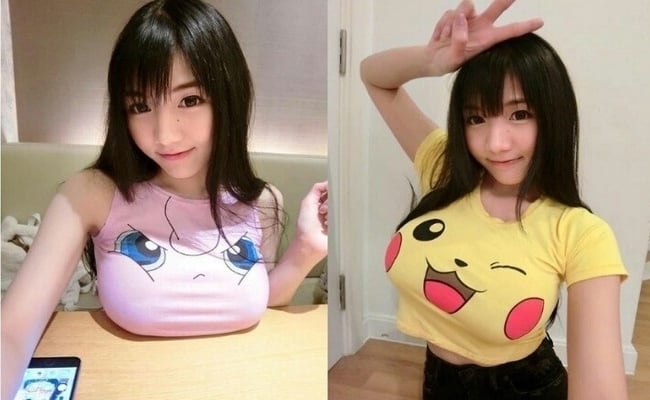 Thanks to a study by lingerie manufacturer Triumph International Japan, we now know the size of Japanese knockers have become larger.

The survey subjects were Japanese females between 20 and 60 years old. Triumph discovered that whilst only 4.5% of its consumers had needed a D-cup size bra or bigger back in 1980, that percentage by 1990 had broadened to 17.6%. By 2018, the percentage had risen inflated imposingly to 53.1%. Or in layman’s terms, an astounding twelve-fold spike over 40 years. “There are two reasons for this,” noted Shuko Sakata, brand marketing manager at Triumph. “The first is changes in the diet, such as increased meat consumption and westernization in general. The other is because we manufacturers have become better at teaching customers the correct way to select a brassiere. When putting on their bras, women tend to lean forward and by so doing gravity collects fleshy parts on the sides of their torso to fill up the cup. That alone can increase cup size by as much as two sizes.”

Arata Samon, a physician and author, forecasts that 70 to 80% of women’s mammary sizes are dictated by heredity. “But for the remaining 20% or so, nutrition has a certain effect,” he explains. “About 90% of a breast is composed of fat cells. The levels of body fat are determined at three life stages: while still an embryo, while nursing up to around age 3, and then at puberty. If one’s mother ingests a lot of beef or pork during pregnancy, the number of fat cells in the fetus will increase. Then what they consume as children and adolescents, such as meat, dairy products, fried chicken, convenience store sandwiches and so on, will enhance the size of the breasts. If you look back at dietary changes over the past 40 years, the greater ingestion of fats has definitely had an impact on women’s breast size.”

Japan Is Back At It Again With Another Weird Invention, This Time Shoes

Mom Shields Son From Seeing Boobs On TV With Towel

How did he die? An African American man, George Floyd, 46, was killed by Minneapolis Police officers. Floyd was being investigated for forgery. George Floyd’s death was caused by a police officer holding him down on the ground with a knee on his neck. He was not shot to death but instead strangulated. Now, his family… END_OF_DOCUMENT_TOKEN_TO_BE_REPLACED

The Blood Test, The Swab Test, and The Saliva Test      Essentially, there are three general types of COVID-19 testing produced so far. One is the rapid test, the second is the saliva test and the other is the swab test. The rapid test (also known as the anti-body test) uses blood samples. The swab test… END_OF_DOCUMENT_TOKEN_TO_BE_REPLACED

The COVID-19 pandemic is one of the biggest modern pandemics known in history. Currently, there are more than five million confirmed cases in the world, with a total of 333,000 deaths. A total of 1.6 million of these confirmed cases are in the US alone. The world is currently in a race of finding a… END_OF_DOCUMENT_TOKEN_TO_BE_REPLACED

Despite concrete data and research, people’s opinions will always be diverse when it comes to a variety of topics including religion, politics, gender, and more. Denial is a common reaction to many important discussions and serious world events. The COVID-19 pandemic does not differ from any issues and is subject to opinions from critiques all… END_OF_DOCUMENT_TOKEN_TO_BE_REPLACED

Back in January, when the Wuhan, China coronavirus broke out, it didn’t make it to the front page of newspapers, in print or virtual form. Today, January feels like a lifetime away. Like it or not, people around the world have adapted to the new normal – staying at home, frequent hand washing, and social… END_OF_DOCUMENT_TOKEN_TO_BE_REPLACED

Since the beginning of the year 2020, the whole world has been stupefied by the rapid spread of a deadly coronavirus known as COVID-19. World superpowers in the West were unable to prevent the virus from reaching their borders. Because of this fact, the novel coronavirus COVID-19 became a world-wide pandemic no less than three… END_OF_DOCUMENT_TOKEN_TO_BE_REPLACED