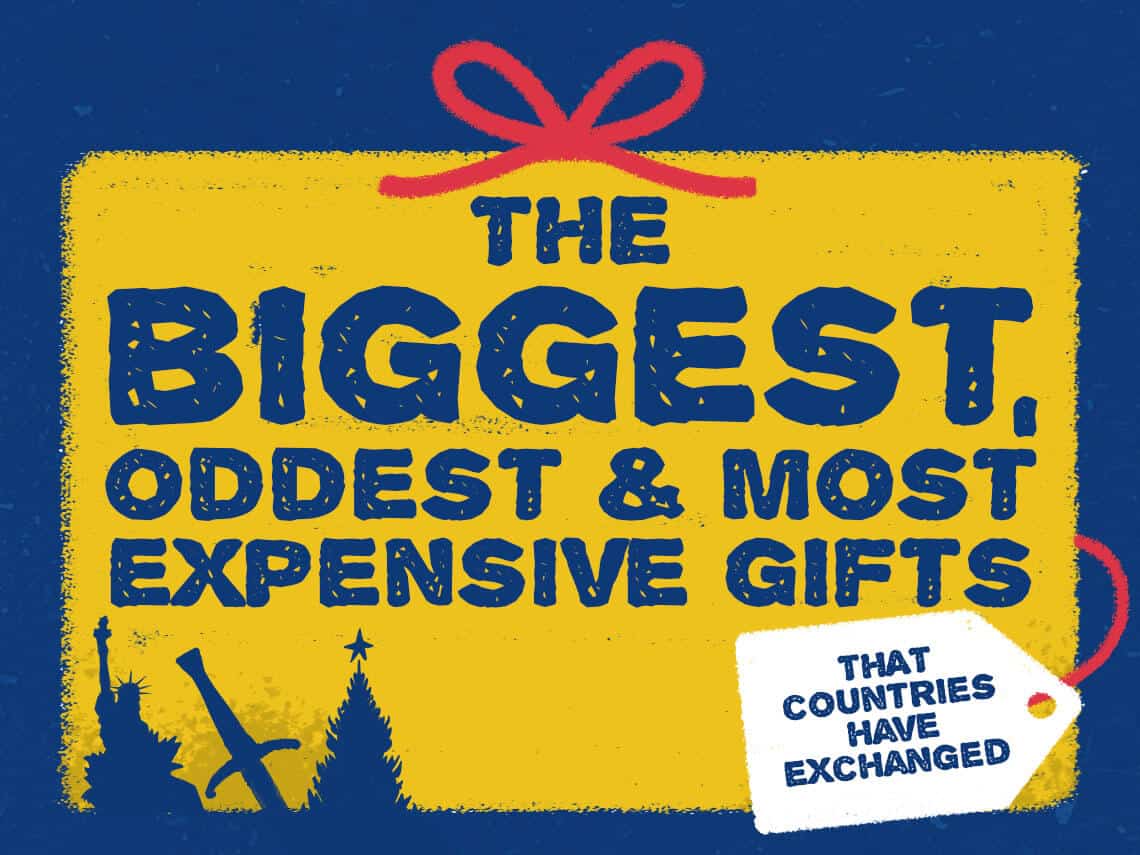 Gift-giving isn’t just a seasonal affair between friends, families and acquaintances. The art of gift-giving is also conducted on a national scale with countries often sending each other big, weird and expensive gifts.

Experts in all things gifts, Vanilla Reindeer put together some examples of these expensive and odd gifts that have been shared between countries over the years, and we’ve got to say… some are rather bizarre! Read on to find out what they are.

This gift cost the French upwards of five million dollars. Yes, the cultural symbol of America was famously a gift from the French. What did the Americans do to deserve such a large and expensive gift? Well, America changed the world order with their revolution in 1776. Upending a huge colonial power like Britain and fighting for a constitutional republic, inspired the French to do the same. To show solidarity, support, and a big middle finger to the British, France commissioned the Statue of Liberty, to be gifted to America in 1886.

Every year, Norway will send a 20+ metre spruce tree which is then put on display in Trafalgar Square for the Christmas season. This tradition began in 1947, as a token of gratitude for the UK’s support for Norway during WWII. The exiled Norweigan government took refuge in London during Nazi occupation, giving them a safe place to coordinate resistance and liberation attempts. A wonderful tradition and gesture in these decidedly dark times.

Poor Holland. In the midst of two of the world’s largest conflicts, the Netherlands just wanted to stay out of it. Declaring neutrality in World War 1 & 2, their location was never going to allow them to sit these out. In both wars, they asked that no conflict or hostilities were to take place on their land and in their waters. But this was violated by the Germans on both instances. Canada took in the Dutch royal family during WWII, and as a yearly token of gratitude, the Dutch send 100,000 tulips.

China gifted the United States of America two giant pandas following an official visit from Richard Nixon. Given to the National Zoo in Washington D.C. the visit was particularly special as it marked the end of 25 years of no communication or diplomacy between the two countries. How things have changed. China is an economic force to be reckoned with now, and the US and China are currently slugging it out in a trade war.

The Sword of Stalingrad

Another gift with connections to WWII, the Sword of Stalingrad was commissioned by King George VI of the UK as a gift for Joseph Stalin. Now, why would the UK create such a lavish gift for such an awful man? The Battle of Stalingrad was a five-month battle and claimed the lives of a million Axis soldiers.

Having not paid attention to the fate of literally everyone and anyone who has fought in Russia in their deadly winter, the Germans suffered their largest ever military defeat and the war itself changed direction and in favour of the Allies.

Remember 2009? Imagine showing someone from 2009 literally any news story from today. Obama had just become president and the world tuned in to see the USA vote in their first black president. How did Obama decide to gift the UK, the other members in the ‘special relationship’, that same year? With an iPod Classic, and some DVDs. You’d be forgiven for thinking he just popped into an HMV on the way to the Palace.

Some other notable diplomatic gifts include:

Also read: 7 Ideal Gifts For The Self-Absorbed Trump Supporters In Your Life

The moment he was inaugurated, immediate changes made by Biden made headlines across the country. These are many of the controversial issues and topics that were shunned and ridiculed by the former administration. Americans can finally breathe a sigh of relief that these concerns have finally reached government policies. It seems clear that Biden has been… END_OF_DOCUMENT_TOKEN_TO_BE_REPLACED

Presidential pardons are one and many in the history of the US. There are many times when US Presidents granted reprieves for their citizen’s misdeeds. The US President may grant a pardon for any individual, including himself, for any crimes done against the country and its citizens. This issue of Presidential pardons has been trending… END_OF_DOCUMENT_TOKEN_TO_BE_REPLACED