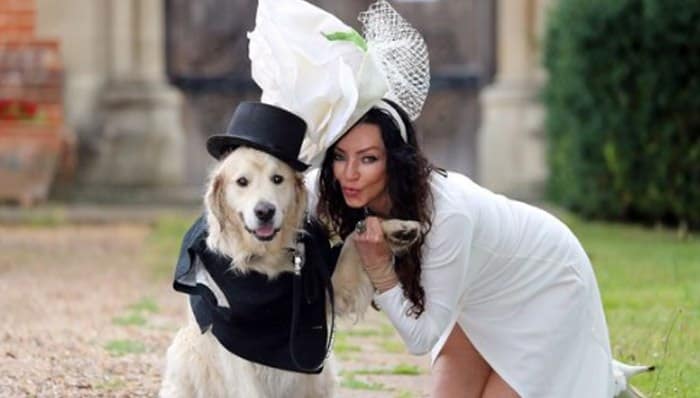 “I found the one and I love him,” she claims. In the ’80s, Hoad was a swimsuit model and had relationships with stars such as Formula One driver James Hunt and golfer Seve Ballesteros. However after a bombardment of unsuccessful boyfriends over the years — and giving birth to a child (a son who’s now 25) — Hoad figured the only ‘man’ she could rely on was her steadfast Logan. Hoad and her lucky pooch guest appeared on morning talk show This Morning to exchange “I dos” live in front of hundred of thousands of viewers. “All that I have in my doggy treat cupboard I promise to give to you,” states Hoad. After Hoad remarked, “I do,” the officiant briefly waited for Logan’s reply before taking his lack of dissent as a “yes.”

“He doesn’t seem too excited!” Hoad quipped. It’s been a roller coaster romance for the item: Just a year ago, Hoad rescued Logan. “He had a traumatic first four years being locked and beaten in a utility cupboard,” she explains. “He’s saved me and I’ve saved him. I was a broken woman when my last dog died.” After feeling “unlucky in love,” she contends she’d “given up” on finding the perfect match. “I tried every app – MillionaireMatch, Tinder, but it don’t have any luck. Maybe it’s me?” she pondered to herself. A brief fling with a guy she met online — who turned out to have a wife on the side — was the final straw for Hoad. That’s when eloping with her pup began to seem more and more like a feasible option. “After that my friends who previously joked about marrying Logan, my dog, became more serious, and I thought, ‘Why not?’”

Woman Arrested After Having Sex With Dog On Social Media

Recent trends have reported that K-pop fans in the US are getting mixed in with current issues in politics. K-pop fan communities are using online platforms to rally up and protest against racism in the United States. In support of the #BlackLivesMatter movement, the online K-pop community has come together in protest. Never has it… END_OF_DOCUMENT_TOKEN_TO_BE_REPLACED

Just this week, lawmakers approved a bill establishing the District of Columbia (D.C.) as the 51st state of the United States of America. This is after multiple calls and protests from the citizens to finally consider D.C. as a state.  However, the bill is not out of the woods yet as it faces multiple oppositions… END_OF_DOCUMENT_TOKEN_TO_BE_REPLACED

John Bolton’s new book entitled ‘The Room Where it Happened’ had been stirring up quite the attention since it was announced for release last week. Officially released only June 23, the new book seems to threaten the Trump administration as there had been moves to get it unpublished. The request was later on turned down… END_OF_DOCUMENT_TOKEN_TO_BE_REPLACED