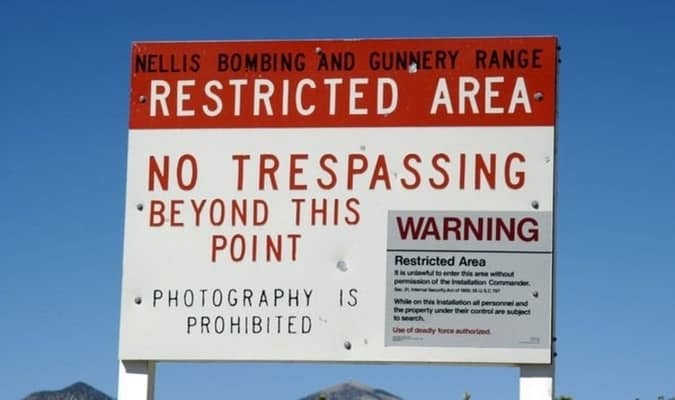 A man was gunned down after attempting to enter Area 51, the top-secret military base in the US, a document from the NNSS divulges.

The news is coming to light in relation to worries that later this year a herd of people will storm Area 51 as sparked by a Facebook event entitled ‘Storm Area 51, They Can’t Stop All Of Us’. A NNSS press release explained that at the security gate a male had refused to cease and drove roughly eight miles whilst in pursuit. When he stopped eventually, he stepped towards security officials with a ‘cylindrical object’ in his palm. The press release stated: “At 5.18pm PST, an unidentified male failed to stop at the Nevada National Security Site (NNSS) security gate at Mercury, Nevada. Both NNSS Security Protective Force Officers (SPOs) and Nye County Sheriff’s Office (NCSO) took up pursuit. After driving approximately eight (8) miles past the security gate, the individual came to a stop, exited his car and approached the SPOs and NSCO with a cylindrical object in-hand. The suspect refused to adhere to verbal commands of both NSCO and the SPOs on scene. When the suspect approached the officers, he was fired upon by both NSCO and a SPO. The suspect died at the scene.”

The event on Facebook, dubbed ‘Storm Area 51, They Can’t Stop All Of Us‘, which is scheduled for 3am on September 20th, has now exceeded one million attendees. The event summary reads: “We will all meet up at the Area 51 Alien Center tourist attraction and coordinate our entry. If we Naruto Run [an attack inspired by Japanese manga, in which people run with their arms outstretched backwards and heads forwards], we can move faster than their bullets. Let’s see them aliens.” Bob Lazar, an American physicist who’s worked with extra-terrestrial technology at a spook US military base known as ‘S-4,’ said: “This is a misguided idea. Area 51 is a classified research base. There are no aliens or alien technology located there. The only place there was ever any alien technology was at Site S4, south of Area 51 proper. That was 30 years ago. The last time someone tried to get in to Area 51 he was shot. This is not the way to go about trying to get more information.”

Was Stephen Hawking Killed by Aliens From the Planet Nibiru?