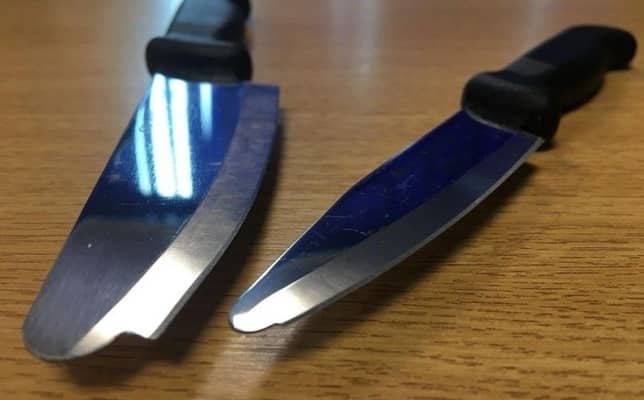 Domestic violence victims will have their kitchen knives supplanted with blunt utensils to ‘stop’ their partners from assaulting them in their own home.

Roughly 100 blunt knives will be passed out by law enforcement to victims of domestic violence. Police in Nottinghamshire are piloting the strategy where the ‘no point’ knives will be gifted to victims who have either been attacked or threatened with a knife. Local cops are uneasy about the high level of knife-related instances that occur in the home, and are hoping the new plan has the prospective to save lives. Knife domestic violence crime makes up more than 18 percent of reported incidents to Nottinghamshire Police. In the past year, out of 900 knife crime reports, 159 were domestic violence related. Superintendent Matt McFarlane, Nottinghamshire Police’s new knife crime strategy manager, who is supervising the scheme, stated: “We do see a fair amount of knife related incidents in domestic abuse not just on the streets.

“This is a measure we need to take. We want to reduce that risk. It is a trial. We have about a 100 of them – and we have so far given out about 50. The knife is blunt at the end – but still functions as a knife – so you can’t stab someone. People will stay in a relationship after some serious episodes of domestic abuse. They may stay together for children, get back together, or might get back together when they are out of prison.” He explained the ‘no point’ knives would ordinarily be given out in a circumstance “where a knife had been used or the victim had been threatened on a previous occasion”. Supt McFarlane furthered: “We are trialing it to see if it makes a difference. Sometimes you have to trial things to see if they work. Anything that stops someone being seriously injured is a good idea.”

How did he die? An African American man, George Floyd, 46, was killed by Minneapolis Police officers. Floyd was being investigated for forgery. George Floyd’s death was caused by a police officer holding him down on the ground with a knee on his neck. He was not shot to death but instead strangulated. Now, his family… END_OF_DOCUMENT_TOKEN_TO_BE_REPLACED

The Blood Test, The Swab Test, and The Saliva Test      Essentially, there are three general types of COVID-19 testing produced so far. One is the rapid test, the second is the saliva test and the other is the swab test. The rapid test (also known as the anti-body test) uses blood samples. The swab test… END_OF_DOCUMENT_TOKEN_TO_BE_REPLACED

The COVID-19 pandemic is one of the biggest modern pandemics known in history. Currently, there are more than five million confirmed cases in the world, with a total of 333,000 deaths. A total of 1.6 million of these confirmed cases are in the US alone. The world is currently in a race of finding a… END_OF_DOCUMENT_TOKEN_TO_BE_REPLACED

Despite concrete data and research, people’s opinions will always be diverse when it comes to a variety of topics including religion, politics, gender, and more. Denial is a common reaction to many important discussions and serious world events. The COVID-19 pandemic does not differ from any issues and is subject to opinions from critiques all… END_OF_DOCUMENT_TOKEN_TO_BE_REPLACED

Back in January, when the Wuhan, China coronavirus broke out, it didn’t make it to the front page of newspapers, in print or virtual form. Today, January feels like a lifetime away. Like it or not, people around the world have adapted to the new normal – staying at home, frequent hand washing, and social… END_OF_DOCUMENT_TOKEN_TO_BE_REPLACED

Since the beginning of the year 2020, the whole world has been stupefied by the rapid spread of a deadly coronavirus known as COVID-19. World superpowers in the West were unable to prevent the virus from reaching their borders. Because of this fact, the novel coronavirus COVID-19 became a world-wide pandemic no less than three… END_OF_DOCUMENT_TOKEN_TO_BE_REPLACED