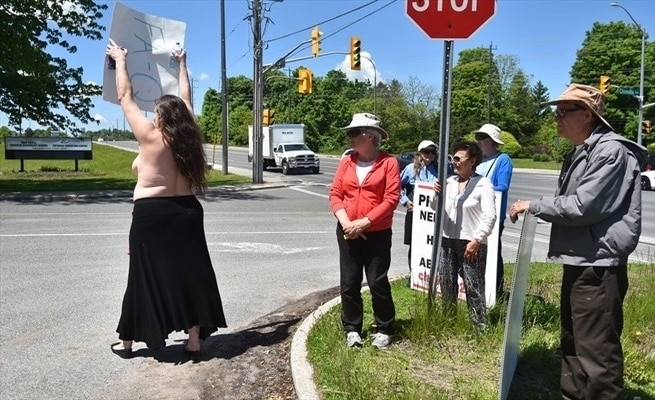 A topless woman’s scheme to take on an anti-abortion protest in front of a high school had her baring her boobies in front of both students and assemblers.

On Friday, June 7, protestors from Choice42 were journeying around to high schools in Peterborough to demonstrate against abortion. They wielded anti-abortion signs, some boasting text while others displayed graphic images alleging to exhibit aborted fetuses. Two students from Holy Cross Catholic Secondary School were in the midst of contending with protestors over the graphic essence of their signs and abortion when a woman strolled by. Holding a sign which stated “Can’t feed it? Don’t breed it!” she then snatched off her shirt and held her sign high above her head. Several moments later both the students and protestors walked away, heading to the school and to their vehicles, respectively. The topless lady followed the demonstrators to their cars and then went back to the street corner at Clonsilla Avenue at Lansdowne Street prior to putting her shirt back on.

Students who observed the event yelled at the woman “this is a (expletive) Catholic school, go away.” The woman replied by suggesting “you’re welcome by the way.” “You’ve never seen t*ts before? You did know it’s your right to show them, right?” the woman furthered. Rosemary Connell, one of the demonstrators who in the past has protested in front of other high schools, tells they brought the graphic signs to the institution because “we find the visual truth of baby killing is very powerful.” Connell claims she “didn’t see the impact” of the lady exposing her breasts. In comparison to adults, she said young folks react more positively to the demonstrations and are more inclined to debate the matter.

You can witness the topless woman for yourself HERE, too … if you’d like.

AbortionBan Tweets Explain How This Law Will Affect Men As Well

9 Epic Photos From Abortion Ban Protests Around The Country