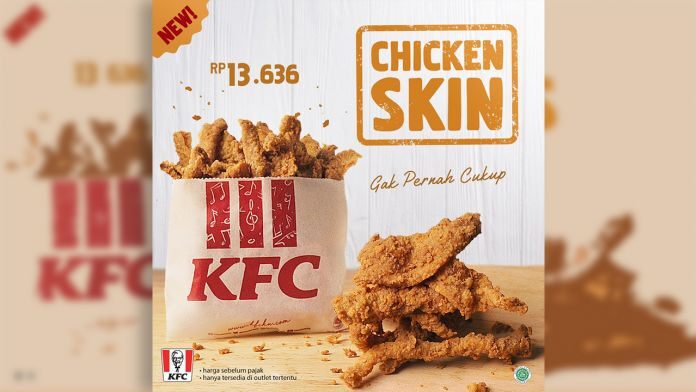 The fries are essentially like fried chicken pieces, minus the actual flesh within – leaving the signature-spiced covering that KFC is famed for.

It’s utterly fascinating to see the menu items in renowned fast food chains around the world. McDonald’s in Italy offers fries with bacon and cheese, while last year McDonald’s Australia too unveiled apple pie-flavored McFlurries so guests could align two of their favorite desserts into one succulent mouthful. Burger King restaurants in Canada sell poutine – the national dish in the country, which sees cheese curds and chips smothered in gravy. Though over at KFC Indonesia, you now can get your paws on something equally beguiling: chicken skin fries.

Last month on its official Twitter feed, KFC Indonesia announced the new menu item; expressing the chicken skin fries are now available at several locations across the country: Kelapa Gading, Cideng, Salemba, Kemang, and Kalimalang. One order of chicken skin fries will set you back 96 cents. Keep in mind, the feedback on social media has been blended. While one KFC regular stated they were ‘overjoyed’, another acknowledged they were a bit disappointed, posting: “I prefer to buy the chicken, then eat the skin directly from there.” Someone else shared: “Some say it’s too salty, others that it’s not salty enough. For me it tastes spicy savory. It’s different to what you’d expect as it’s not the same as normal chicken skin, but the first bite is good. It’s really crisp and crunchy! I’ll definitely order again as a snack.”

Man Ate Free At KFC For A Year By Claiming He’s From ‘KFC Headquarters,’ Gets Arrested

You Can Now Purchase KFC Gravy Candles For Your Abode

How did he die? An African American man, George Floyd, 46, was killed by Minneapolis Police officers. Floyd was being investigated for forgery. George Floyd’s death was caused by a police officer holding him down on the ground with a knee on his neck. He was not shot to death but instead strangulated. Now, his family… END_OF_DOCUMENT_TOKEN_TO_BE_REPLACED

The Blood Test, The Swab Test, and The Saliva Test      Essentially, there are three general types of COVID-19 testing produced so far. One is the rapid test, the second is the saliva test and the other is the swab test. The rapid test (also known as the anti-body test) uses blood samples. The swab test… END_OF_DOCUMENT_TOKEN_TO_BE_REPLACED

The COVID-19 pandemic is one of the biggest modern pandemics known in history. Currently, there are more than five million confirmed cases in the world, with a total of 333,000 deaths. A total of 1.6 million of these confirmed cases are in the US alone. The world is currently in a race of finding a… END_OF_DOCUMENT_TOKEN_TO_BE_REPLACED

Despite concrete data and research, people’s opinions will always be diverse when it comes to a variety of topics including religion, politics, gender, and more. Denial is a common reaction to many important discussions and serious world events. The COVID-19 pandemic does not differ from any issues and is subject to opinions from critiques all… END_OF_DOCUMENT_TOKEN_TO_BE_REPLACED

Back in January, when the Wuhan, China coronavirus broke out, it didn’t make it to the front page of newspapers, in print or virtual form. Today, January feels like a lifetime away. Like it or not, people around the world have adapted to the new normal – staying at home, frequent hand washing, and social… END_OF_DOCUMENT_TOKEN_TO_BE_REPLACED

Since the beginning of the year 2020, the whole world has been stupefied by the rapid spread of a deadly coronavirus known as COVID-19. World superpowers in the West were unable to prevent the virus from reaching their borders. Because of this fact, the novel coronavirus COVID-19 became a world-wide pandemic no less than three… END_OF_DOCUMENT_TOKEN_TO_BE_REPLACED