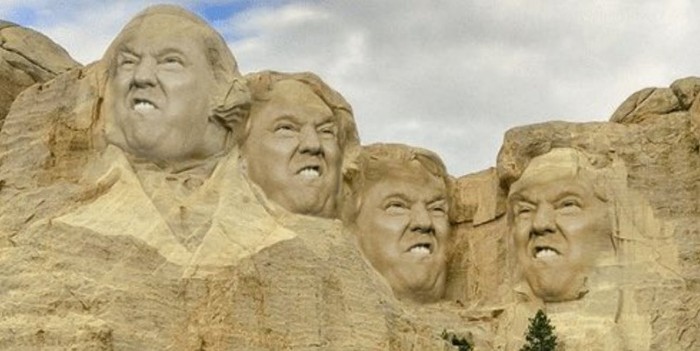 The year isn’t even halfway over, yet Donald Trump has managed to make a fool of himself and our country countless times. From inviting the national college football champions, the Clemson Tigers, all the way to the White House for some McDonald’s to his to the dreaded results of Mueller’s investigation, it has been one hell of a year. And it’s not even close to being over. Here are the most brutal Trump memes of 2019 so far.

While 2018 was all about impeachment, 2019 has focused more on Trump’s criminal behaviors that just might put him behind bars. He will never look like the guy in this meme though. We all know he’ll end up at the same cushy prison Cohen is in. Hopefully, for the sake of the other prisoners, Trump’s sentence doesn’t overlap with his former lawyers.

Trump’s New Suit Will Be Orange

Before the next presidential election, there’s a good chance that Trump will be trading in his navy pants suits for orange jumpsuits. At least he can rest easy knowing that it will go well with his skin complexion.

First Kanye West was supporting Trump. Then he was challenged on Trump’s obvious racism and managed to come up with the insane idea that slavery was voluntary. After a meeting at the White House, Kanye decided Trump made a fool of him and that he was being used. So, who knows where their relationship stands these days, but this guy could totally be their love child.

It may be hard to believe Michael Cohen’s testimony since he lied from the start, but in his defense, that’s kind of his job. He’ll be out of prison in no time though, while Trump will still be dealing with Mueller’s investigation and planning a second term in the White House. Cohen may be a liar, but Trump is an egotistical, narcissistic maniac.

The Best Part Of The Mueller Report

The Mueller report is about as long as a George R. R. Martin novel, but the best part is definitely the description of Trump’s reaction to learning who would be leading an investigation into his relationship with Russia. The report quotes Trump saying, “Oh my God. This is terrible. This is the end of my Presidency. I’m fucked,” after being told that Mueller would be writing the report. Probably because Trump knew that he had nothing on the guy to blackmail him with and ensure the investigation went his way.

Trump has tried pretty much everything to get out of this investigation. He has tried to criminalize parts of the process, claimed investigators were committing treason, and regularly uses his mind control methods on Twitter to convince his supporters that there were “no crimes” and “no collusion.” Which brings me to the next meme.

Trump shared this Game of Thrones meme on Twitter, and HBO was not happy. This is the second time the president has used a meme based on the hit show to push his ideas, and the network released a statement asking him to stop. It said:

Though we can understand the enthusiasm for Game of Thrones now that the final season has arrived, we still prefer our intellectual property not be used for political purposes.

Trump doesn’t care though. He’s already the King of the Seven Kingdoms in his head.

Welcome To The Twilight Zone

And the final meme, the one that describes Trump’s entire presidential experience. Thanks for tuning in!

Memes That Explain Why An #AbortionBan Makes No Sense

The Blood Test, The Swab Test, and The Saliva Test      Essentially, there are three general types of COVID-19 testing produced so far. One is the rapid test, the second is the saliva test and the other is the swab test. The rapid test (also known as the anti-body test) uses blood samples. The swab test… END_OF_DOCUMENT_TOKEN_TO_BE_REPLACED

The COVID-19 pandemic is one of the biggest modern pandemics known in history. Currently, there are more than five million confirmed cases in the world, with a total of 333,000 deaths. A total of 1.6 million of these confirmed cases are in the US alone. The world is currently in a race of finding a… END_OF_DOCUMENT_TOKEN_TO_BE_REPLACED

Despite concrete data and research, people’s opinions will always be diverse when it comes to a variety of topics including religion, politics, gender, and more. Denial is a common reaction to many important discussions and serious world events. The COVID-19 pandemic does not differ from any issues and is subject to opinions from critiques all… END_OF_DOCUMENT_TOKEN_TO_BE_REPLACED

Back in January, when the Wuhan, China coronavirus broke out, it didn’t make it to the front page of newspapers, in print or virtual form. Today, January feels like a lifetime away. Like it or not, people around the world have adapted to the new normal – staying at home, frequent hand washing, and social… END_OF_DOCUMENT_TOKEN_TO_BE_REPLACED

Since the beginning of the year 2020, the whole world has been stupefied by the rapid spread of a deadly coronavirus known as COVID-19. World superpowers in the West were unable to prevent the virus from reaching their borders. Because of this fact, the novel coronavirus COVID-19 became a world-wide pandemic no less than three… END_OF_DOCUMENT_TOKEN_TO_BE_REPLACED

For months since the start of 2020, the attention of the world has focused on immediate response efforts to contain and combat the novel coronavirus, also known as COVID-19. The deadly virus has pushed millions of people into isolation.  This kept people in their homes for weeks and months away from their work, their friends,… END_OF_DOCUMENT_TOKEN_TO_BE_REPLACED