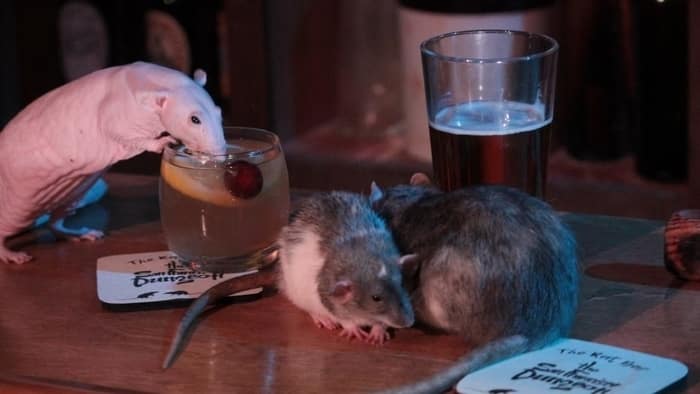 San Francisco would like to show you its alarming past by making you imbibe with live rats. Fisherman’s Wharf’s The San Francisco Dungeon is launching an engaging experience about the Bay City’s “weird, twisted, dark” history — and that entails having live rats “scurry all over you” for whatever reason. The Dungeon had before provided a tour with something dubbed a “Rat Café.” “Let’s be honest — pastries and coffee were nice and all when we hosted the Rat Café but that was a lot of work. We thought, ‘F it. This time, get drunk, see our show, touch rats and get drunk some more,’” states Matthew Clarkson, regional head of marketing for West Coast Midway Attractions, Merlin Entertainments Group (parent company of The San Francisco Dungeon), North America.

The odd pop-up will start June 13 and run through June 15, offering visitors an hour “journey into the dark place where live rats run free and the booze flows like water.” Those who buy tickets will be furnished “Ama-RAT-o Sours” formulated with Amaretto, a citrusy blend and a “rat’s tail” garnish, prior to being taken on a ride educating about the gold rush, shanghaiing, Chinatown gangs, Alcatraz and, fittingly, the plague. Following the history lesson, attendees are hauled off to the Rat Bar where they are able to hold and touch live rodents, offered by nonprofit Ratical Rodent Rescue, for 30 minutes. San Francisco or rat-enthusiasts will want to purchase their tickets asap, however, as the company said their previous rat pop-up sold out in less than a hour.

McDonald’s Staff Chase Rat Out Of Restaurant With Brooms [Video]

The Blood Test, The Swab Test, and The Saliva Test      Essentially, there are three general types of COVID-19 testing produced so far. One is the rapid test, the second is the saliva test and the other is the swab test. The rapid test (also known as the anti-body test) uses blood samples. The swab test… END_OF_DOCUMENT_TOKEN_TO_BE_REPLACED

The COVID-19 pandemic is one of the biggest modern pandemics known in history. Currently, there are more than five million confirmed cases in the world, with a total of 333,000 deaths. A total of 1.6 million of these confirmed cases are in the US alone. The world is currently in a race of finding a… END_OF_DOCUMENT_TOKEN_TO_BE_REPLACED

Despite concrete data and research, people’s opinions will always be diverse when it comes to a variety of topics including religion, politics, gender, and more. Denial is a common reaction to many important discussions and serious world events. The COVID-19 pandemic does not differ from any issues and is subject to opinions from critiques all… END_OF_DOCUMENT_TOKEN_TO_BE_REPLACED

Back in January, when the Wuhan, China coronavirus broke out, it didn’t make it to the front page of newspapers, in print or virtual form. Today, January feels like a lifetime away. Like it or not, people around the world have adapted to the new normal – staying at home, frequent hand washing, and social… END_OF_DOCUMENT_TOKEN_TO_BE_REPLACED

Since the beginning of the year 2020, the whole world has been stupefied by the rapid spread of a deadly coronavirus known as COVID-19. World superpowers in the West were unable to prevent the virus from reaching their borders. Because of this fact, the novel coronavirus COVID-19 became a world-wide pandemic no less than three… END_OF_DOCUMENT_TOKEN_TO_BE_REPLACED

For months since the start of 2020, the attention of the world has focused on immediate response efforts to contain and combat the novel coronavirus, also known as COVID-19. The deadly virus has pushed millions of people into isolation.  This kept people in their homes for weeks and months away from their work, their friends,… END_OF_DOCUMENT_TOKEN_TO_BE_REPLACED