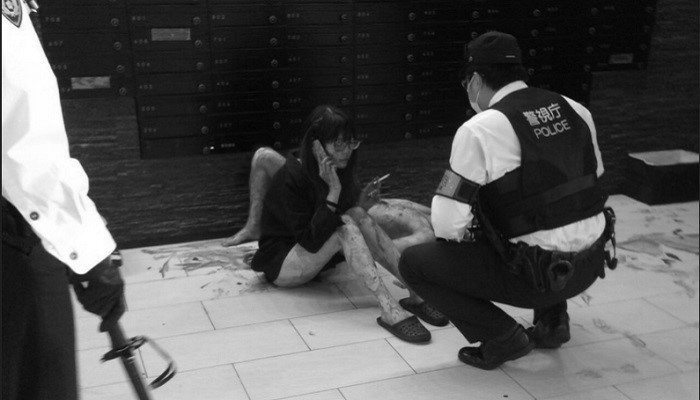 Loves works in mysterious ways and often manifests in different forms. However, contrary to most of our beliefs, it’s not all rainbows and butterflies (right, Adam Levine?). Sometimes, love can be painful for both parties involved. One Japanese woman proves this yet again after stabbing the man she loved, nearly killing him… hol’ up a minute…

That doesn’t add up, but the Japanese woman, named Yuka Takaoka, 21, is not your typical girl next door. She lives in the Shinjuku district in Tokyo in an apartment building and apparently has a huge crush on a neighbor. So, she went up into his apartment block and… stabbed him… with a knife… to the stomach. Because that’s how love works?

Still, it seems Takaoka felt like she acted rather carelessly. She actually called the police after stabbing her male friend and told them that she stabbed someone, basically admitting the crime. Once they arrived, the police came upon a disturbing scene: Takaoka was sitting beside her bleeding male friend while smoking.

“My plan was to first kill him and then I thought about committing suicide. Since I loved him so much, I just couldn’t help it. After killing [him], I, too, wanted to die,” Takaoka was quoted by the police. The Japanese woman was immediately arrested and taken into custody while her bleeding male friend was rushed to the hospital and appeared to be in a critical condition.

After being questioned by the authorities, it was revealed that the two likely had a dispute in their relationship. Apparently, Takaoka was a bar hostess and her victim was most likely a bar host. Oddly enough, the Japanese woman was seen smiling during her arrest:

Building Bridges: Australian Woman Falls In Love With A Bridge, Marries It

The world is devastated by the news that Britain’s Prince Philip, the Duke of Edinburgh, has died at the age of 99. Palace media confirms that the Duke has expired mid-day today, April 9th. The announcement did not contain any specifics on the cause of death. The United Kingdom will enter a state of national… END_OF_DOCUMENT_TOKEN_TO_BE_REPLACED

Who would have known that religious prophets would be among the most loyal supporters of former President Trump? In fact, it has been observed that the most conservative Christians may have been the right amount of push for Trump’s presidential win back in 2016. Since Trump’s election back in 2016, numerous self-proclaimed “prophets” have been… END_OF_DOCUMENT_TOKEN_TO_BE_REPLACED

President Biden falls and slips multiple times on the Airforce One Steps and PEOPLE ARE GOING CRAZY! What’s the big deal? Some people are hating, while others are making memes just for the fun of it. We are all human, aren’t we? Everyone’s expected to stumble some time in their lives. However, with the internet… END_OF_DOCUMENT_TOKEN_TO_BE_REPLACED