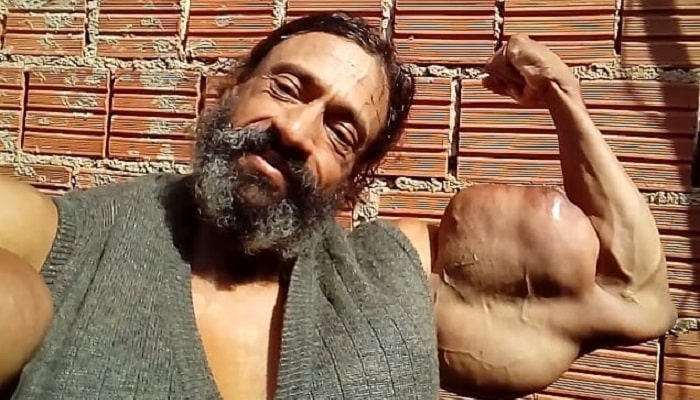 Getting your ideal body takes a lot more than tips, food, or gamma radiation. It requires time and patience, two things that are in short supply these days. Hence, one man from Brazil took quite a shortcut with some anabolic steroids he injected on his muscles to inflate them. As a result, the bodybuilder achieved the bulging muscles of his dreams… sort of.

The bodybuilder in question goes by the name of Valdir Segato, a man estimated to be in his early 50s. Valdir is out to give Ahnold a run for his money and his Mr. Universe titles; he now has 23-inch biceps, which surpasses Schwarzenegger’s 22-inch bicep circumference at his prime. That isn’t to say Valdir did it with hard work, however. Here’s what he looks like:

No, that’s not photoshopped. Here he is in action:

Apparently, for the Brazilian bodybuilder, his physique took 30 percent hard work, and 70 percent synthol, an oil concoction which is an on-site anabolic steroid. It enhances whatever muscle it is injected to for a certain amount of time. It’s actually used by some bodybuilder competitors during contests in moderate amounts to beef up their muscles. However, its risks far outweigh the benefits.

“The doctors tell me to stop it, the advice they give me is to stop using. But it’s my decision to use it because I want to, because I like to,” expressed Valdir. That’s because synthol causes nerve and muscle damage as well as disfigurement. Valdir is even increasing his chances of getting a stroke or amputation using the oil.

Oddly enough, Valdir was a drug addict in the past but he recovered, only to become addicted again to another substance, this time synthol. Despite the risks, Valdir keeps on pushing himself; he wants to look good and become famous– the latter probably being more achievable with his fixation for synthol.