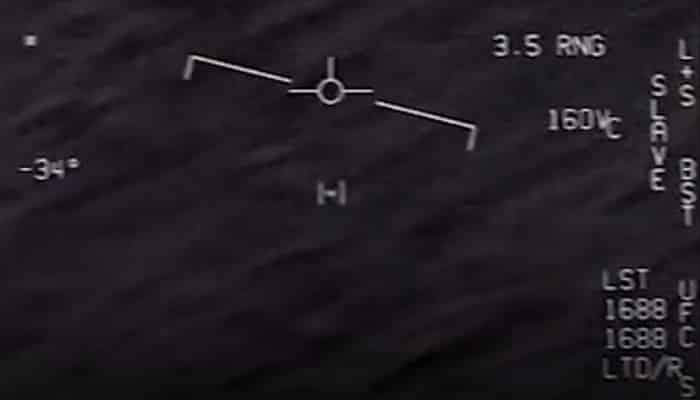 Here we go. Again. Unidentified flying objects (UFO) are a dime-a-dozen these days to tickle our curious minds with thoughts of extraterrestrial life somewhere else. This time it might be different, however; now it’s the military which sighted the alleged UFO, specifically two Navy pilots who were out and about in their training over the East Coast of the US.

Lt. Ryan Graves and his wingman were flying on an F/A-18 Super Hornet one day over the East Coast back in 2014, according to an interview with them released just recently. Graves had been a pilot for a decade but it was the first time he and his wingman saw something weird in the skies flying along with their aircraft.

It appeared to be a spinning unidentified flying object which also flew at amazing speeds and stayed up in the air for hours. Graves suggested that such a feat would not be possible for any aircraft today, “Keeping an aircraft in the air requires a significant amount of energy. With the speeds we observed, 12 hours in the air is 11 hours longer than we’d expect,” he explained.

“The video showed objects accelerating to hypersonic speed, making sudden stops and instantaneous turns — something beyond the physical limits of a human crew,” recalled Graves further. Back in 2004, a similar incident took place and was even caught on video:

Of course, no one is sure what the navy pilots witnessed or caught on camera. One of them even nearly collided his aircraft with it and he caught a glimpse of the object; it was described looking “like a sphere encasing a cube.” Suggestions range from the usual extraterrestrial crafts to the more skeptical “advanced military drone experiments.”

Apparently, even the Department of Defense set up a little-known program for studying such phenomenon and monitoring potential UFOs back in 2012 but it was cut short over funding issues. Until now, no one is sure what the said object is. We’re not saying it’s drunk aliens, of course. What could it be? Feel free to discuss in the comments.

The Blood Test, The Swab Test, and The Saliva Test      Essentially, there are three general types of COVID-19 testing produced so far. One is the rapid test, the second is the saliva test and the other is the swab test. The rapid test (also known as the anti-body test) uses blood samples. The swab test… END_OF_DOCUMENT_TOKEN_TO_BE_REPLACED

The COVID-19 pandemic is one of the biggest modern pandemics known in history. Currently, there are more than five million confirmed cases in the world, with a total of 333,000 deaths. A total of 1.6 million of these confirmed cases are in the US alone. The world is currently in a race of finding a… END_OF_DOCUMENT_TOKEN_TO_BE_REPLACED

Despite concrete data and research, people’s opinions will always be diverse when it comes to a variety of topics including religion, politics, gender, and more. Denial is a common reaction to many important discussions and serious world events. The COVID-19 pandemic does not differ from any issues and is subject to opinions from critiques all… END_OF_DOCUMENT_TOKEN_TO_BE_REPLACED

Back in January, when the Wuhan, China coronavirus broke out, it didn’t make it to the front page of newspapers, in print or virtual form. Today, January feels like a lifetime away. Like it or not, people around the world have adapted to the new normal – staying at home, frequent hand washing, and social… END_OF_DOCUMENT_TOKEN_TO_BE_REPLACED

Since the beginning of the year 2020, the whole world has been stupefied by the rapid spread of a deadly coronavirus known as COVID-19. World superpowers in the West were unable to prevent the virus from reaching their borders. Because of this fact, the novel coronavirus COVID-19 became a world-wide pandemic no less than three… END_OF_DOCUMENT_TOKEN_TO_BE_REPLACED

For months since the start of 2020, the attention of the world has focused on immediate response efforts to contain and combat the novel coronavirus, also known as COVID-19. The deadly virus has pushed millions of people into isolation.  This kept people in their homes for weeks and months away from their work, their friends,… END_OF_DOCUMENT_TOKEN_TO_BE_REPLACED