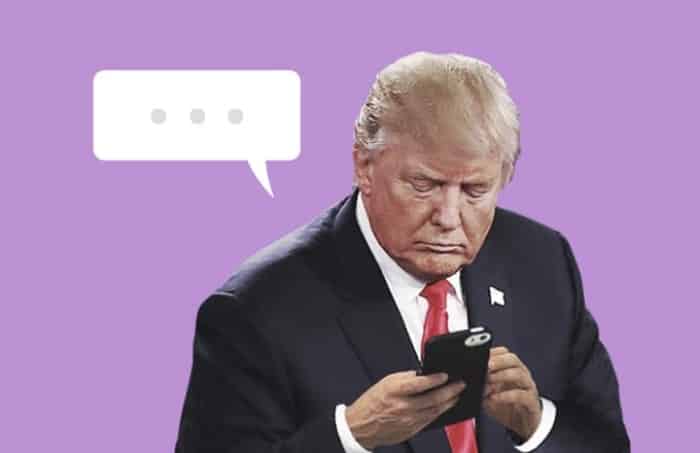 If we manage not to destroy our planet for a few more centuries, Donald Trump will go down in history as the Twitter president. While entertaining, his tirades display the kind of psychotic behavior that will give him the reputation of being the Mad King of the United States. Kids will love to study his short time in the White House as it will likely be considered a turning point for this country right before our downfall. Lucky us, we all get to witness it first hand and Trump’s most recent Twitter tantrum is full of fear and denial, proving he’s closer to impeachment than we may think.

One of Trump’s go-to moves when he’s being called out for doing something stupid or illegal is to bash the media. Everything he does wrong just so happens to be “fake news,” but he doesn’t realize that what he’s doing is drawing more attention to it. CNN’s ratings have nothing to do with his capability to do his job. Perhaps if he spent less time talking trash on Twitter and more time learning how the laws affect him as a president he wouldn’t be looking at impeachment and time behind bars. Also, I thought Trump was the dumbest man on television.

Bring Back The Crazies

Trump knows that by allowing the conservative nut jobs to have free reign on social media that he’ll look far less stupid. Several alt-right activists have had their Facebook and Twitter accounts shut down due to the obscene and hateful comments they were making. People don’t understand that while we have freedom of speech in our country, that doesn’t come without consequences. Giving these kinds of people an outlet for their alt-right agenda is incredibly harmful to our country. (The same goes for the alt-left.) Trump is desperate to have these kinds of people backing his decisions though because without them his fan base is practically non-existent.

Trump Is Still Claiming No Collusion

This is denial at its finest. Mueller’s report found several pieces of evidence that demonstrate most of the crimes Trump has been accused of, but not enough to convict. Not yet, at least. Mueller was forced to provide a report by a certain date, so he described in detail what he had on the president up until that point. The summary was highly misleading and was written with an obvious bias, yet Trump continues to play the victim.

If his Tweets weren’t stupid enough, Trump actually used his potential second term in office as a threat. Apparently, if we keep trying to impeach him this will only solidify his win in 2020. Or, that’s what he’s trying to convince us will happen. Anything to try to get the Democrats to back off. The man has clearly been backed into a corner.

Trump is banking on the fact that his supporters will never read the actual Mueller report in order to make up their own mind about its contents. It’s incredibly long and we all know that Trump can’t read, so he definitely hasn’t read it either. Instead, he is making up things as he goes along and posting them on Twitter because he knows his supporters will blindly believe anything he says. No one wants a “do-over,” people just want a conclusive answer.

Suddenly Trump has the urge to “get back to work” when we all know he spends most of his nights on Twitter, his mornings in bed, and his weekends on the golf course. The fact that he’ never working is actually great for our country because it means he’s not doing as much damage as he could potentially.

Another thing often found in Trump’s Twitter tantrums is a list of all the wonderful things he has done for us. Not only is it a bunch of lies, but has literally nothing to do with why people are seeking impeachment. The man is a criminal and likely a sociopath, but his need to constantly bring up impeachment shows just how scared he is.

Trump thinks if he keeps pointing fingers at other people that we’ll eventually stop pointing fingers at him. Unfortunately, he only has two hands and we have millions so this strategy of his is never going to work. I agree though, people should be held accountable for making up stories and lying to the public for personal gain. Spreading lies that a president of the United States was born out of the country, in Kenya for example, should be a punishable offense. Promising to build a border wall paid for by Mexico and then trying to use American tax dollars to cover the bill is an unacceptable lie. People shouldn’t be able to get away with hiding one’s taxes to cover up years of non-payment. Trump may want to hold off on enforcing these libel laws.

When dictators feel that they’re losing control of the people, they start accusing them of treason and killing them in the streets. Fortunately, that doesn’t fly in this country. Trump’s version of public execution is firing people, which he seems to enjoy doing roughly every few weeks. Since when is not agreeing with a president’s decisions and investigating his criminal activity treason anyway? People fear the word because its definition is so vague. If Trump had his way though, anyone who mocked his tweets or posted an unflattering meme would be considered betrayal to the country. Trying to get a criminal out of the Oval Office is NOT treason. It’s heroic.

Another Dig At The Dems

It’s almost as if Trump has a timer that goes off every few hours so that he knows it’s time to tweet something ridiculous about Democrats. There can be no “do-over” on the Mueller report, but a continued investigation makes sense at this point. So much money was spent on it, wouldn’t it be nice if there was finished? Obviously, Trump doesn’t want this as the findings won’t be in his favor. He may be a jackass, but it’s hard to watch the man squirm as the end of his reign gets closer and closer.

The world is devastated by the news that Britain’s Prince Philip, the Duke of Edinburgh, has died at the age of 99. Palace media confirms that the Duke has expired mid-day today, April 9th. The announcement did not contain any specifics on the cause of death. The United Kingdom will enter a state of national… END_OF_DOCUMENT_TOKEN_TO_BE_REPLACED

Who would have known that religious prophets would be among the most loyal supporters of former President Trump? In fact, it has been observed that the most conservative Christians may have been the right amount of push for Trump’s presidential win back in 2016. Since Trump’s election back in 2016, numerous self-proclaimed “prophets” have been… END_OF_DOCUMENT_TOKEN_TO_BE_REPLACED

President Biden falls and slips multiple times on the Airforce One Steps and PEOPLE ARE GOING CRAZY! What’s the big deal? Some people are hating, while others are making memes just for the fun of it. We are all human, aren’t we? Everyone’s expected to stumble some time in their lives. However, with the internet… END_OF_DOCUMENT_TOKEN_TO_BE_REPLACED