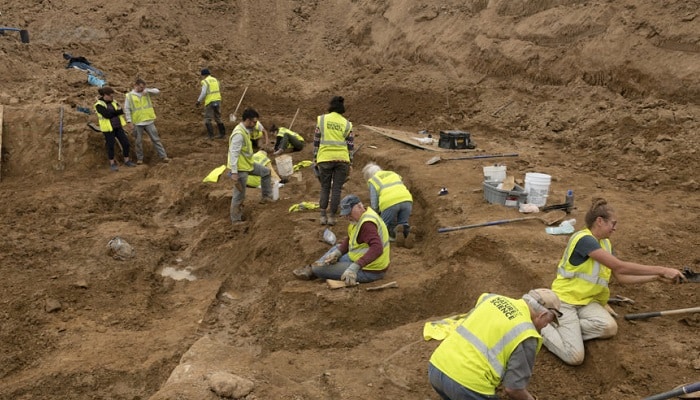 Well, what do you know? Life does find a way. The very soil we are living on right now might be an important piece of history for the Earth and those who lived here before us. Such an idea is reinforced after construction workers discovering some dinosaur bones on the very suburbs they were supposed to develop in Denver.

Back on May 15, Highland Ranch construction workers in Denver, Colorado unearthed quite a find: dinosaur bones or fossils right in the suburb area they were expanding. Since then, they have been digging and discovering more of the dead dinosaur’s bones which even appeared to belong to a rare horned dinosaur.

Initially, some of the construction workers even believed that what they dug up was just trash. Luckily, they called their boss to check up on the thing and the rest was history.

“I’ve found plenty of trash. I was part of a team that dug up napalm, stored in enough 55-gallon barrels to fill a few semi-trucks, in Southern California. But this is my first dinosaur,” according to David Rahm of the Brinkmann Constructors, one of the workers. They called the Denver Museum of Nature and Science to examine the several huge rib cage bones and a foot-and-a-half long humerus.

Goldblum There GIF from Goldblum GIFs

The experts hypothesized that the bones could have been there somewhere between 66 and 68 million years old. Unfortunately, a lot of work is still required to determine exactly what species of dinosaur it was. To start with, they only know that it was a horned one.

Typhoon Warning In Japan Mistaken By Tourists As Godzilla Alert

The US arms sale industry is large and successful. More than 30% of exported weapons in the world come from the United States. They supply to no less than 90 nations making it one of the largest suppliers of weapons in the world. The US makes an estimate of almost 200 Billion dollars in annual… END_OF_DOCUMENT_TOKEN_TO_BE_REPLACED

Now that the election results are almost final, we all want to ask what’s going to happen to Donald Trump after leaving the office? All US Presidents inevitably reach the point where they leave the White House.  Besides, the constitution states that all US Presidents are subject to a two-term limit. What do former presidents… END_OF_DOCUMENT_TOKEN_TO_BE_REPLACED

This is the first time in modern history that the US held presidential elections in the middle of a pandemic. In truth, the US elections may have overshadowed COVID-19 and the side effects are limitless. America is facing a tough crisis of discontentment with the current administration. An understandable case but a situation that may… END_OF_DOCUMENT_TOKEN_TO_BE_REPLACED