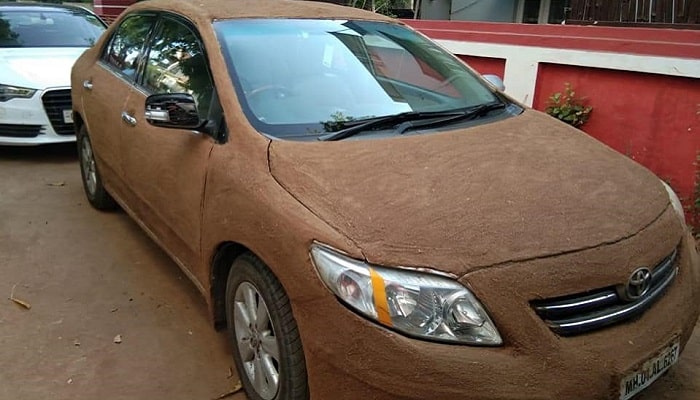 There’s just no end to the resourcefulness of human beings, especially when it comes to dealing with the forces of nature. Time and again, we have adapted to survive and really shouldn’t stop unless we want to go extinct. One woman from India has raised the banner of adaptation once more when she covered her own car in cow dung to protect it from heat.

The brilliant car owner in question is Sejal Shah and she lives in Ahmedabad, Gujarat, India. It’s already summer there and Shah and her neighbors have been dreading the intense summer heat that goes up to 45 degrees Celsius. In fact, it can get so bad that people are advised to stay indoors during specific times of the day.

Shah, however, also worried about her car (a Toyota sedan) out in the sweltering summer heat. Hence, she thought of a brilliant idea. Shah found out that cow dung can be as effective an insulator for cars as they are for housing. So, she covered her whole sedan with cow dung (minus the windshields, headlights, and wheels of course):

Shah’s resourcefulness caught the attention of one of her neighbors and he posted it online. She also explained her logic in insulating her car, saying that it’s more than just to keep the heat out.

Gujarat: Sejal Shah, a resident of Ahmedabad has covered her car with cow dung to beat the heat, says,' The heat was getting unbearable. I have used cow dung in my house for flooring & from that experience I thought of doing something with my car.' pic.twitter.com/xTLFhbzX8h

“It not only keeps my car cool but also helps in preventing pollution. The harmful gases that are released while we use car AC increase the temperatures and contribute to global warming. I drive my car switching off the AC as the cow-dung keeps it cool,” she reasoned. Not a bad use for some spare cow dung; as long as you can withstand the smell, why not?

The US arms sale industry is large and successful. More than 30% of exported weapons in the world come from the United States. They supply to no less than 90 nations making it one of the largest suppliers of weapons in the world. The US makes an estimate of almost 200 Billion dollars in annual… END_OF_DOCUMENT_TOKEN_TO_BE_REPLACED

Now that the election results are almost final, we all want to ask what’s going to happen to Donald Trump after leaving the office? All US Presidents inevitably reach the point where they leave the White House.  Besides, the constitution states that all US Presidents are subject to a two-term limit. What do former presidents… END_OF_DOCUMENT_TOKEN_TO_BE_REPLACED

This is the first time in modern history that the US held presidential elections in the middle of a pandemic. In truth, the US elections may have overshadowed COVID-19 and the side effects are limitless. America is facing a tough crisis of discontentment with the current administration. An understandable case but a situation that may… END_OF_DOCUMENT_TOKEN_TO_BE_REPLACED