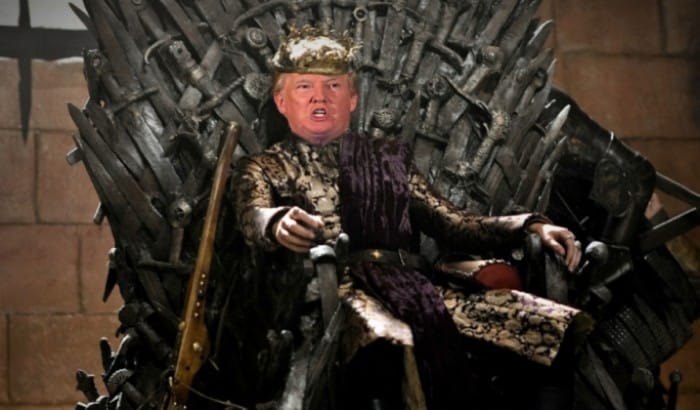 Game of Thrones may have come to an end as a show, but the live-action version continues to play out in D.C. Tensions have never been higher as President Donald Trump continues to lose his shit over his potential impeachment and the 2020 presidential race starts heating up. Since most of us prefer the fictional version of this story, let’s compare a few Game of Thrones characters to U.S. politicians.

SPOILER ALERT! This article contains spoilers from the final season of Game of Thrones.

Donald Trump Would Be Joffrey

Even George RR. Martin has gone on the record talking about how he has noticed similarities between the clown in the Oval Office and the second Baratheon king to sit on the Iron Throne. In an interview with The New York Times Martin said:

They have the same level of emotional maturity, and Joffrey likes to remind everyone that he’s king. And he thinks that gives him the ability to do anything. And we’re not an absolute monarchy like Westeros is. We’re a constitutional republic. And yet, Trump doesn’t seem to know what that means. He thinks the presidency gives him the power to do anything. And so, yeah, Joffrey is Trump.

Not to mention the similarities in how both Joffrey and Trump treat women, which brings me to the next person on our list.

Melania Trump Would Be Sansa

Sansa was an incredibly complex character on Game of Thrones who went through a significant amount of changes. By the time the final episode aired, there was little left of the young girl we first met in Winterfell who dreamed of becoming queen. Melania reminds me of this early version of Sansa as coming to the United States and marrying a wealthy American is very similar to becoming royalty by today’s standards.

Like Sansa was with Joffrey, Melania is heavily controlled by Trump and is likely regretting her marriage. While Sansa was able to avoid marriage to King Joffrey, she was married several times afterward to those who treated her less than fairly. Sansa was able to gain strength from this and we can only hope that Melania is able to do the same as reports of Trump’s affairs and history of sexual assault continues to surface.

Alexandria Ocasio-Cortez Would Be Arya

Arya is one of the few characters on Game of Thrones who refuses to apologize for who she is. Even in the very last episode she turns down what was basically a marriage proposal and has stayed true to herself throughout the series, even when she was wearing the face of someone else. Arya certainly grew up to become a strong, vocal woman, but she will never be what is considered a “lady.”

Alexandria Ocasio-Cortez has a similar voice when she’s defending herself, which she has had to do far too often since becoming elected to Congress. She has always been honest about her upbringing and the changes she wants to make in our country. On top of that, AOC never misses an opportunity to call out other politicians on their bullshit and refuses to be a doormat. She may be young, and she may be a woman, but she doesn’t let that get in her way for even a second.

Bernie Sanders Would Be Daenerys

All Daenerys wanted was to sit on the Iron Throne as the first generous and kind queen. She sought out to take the power away from those considered higher class who were taking advantage of their people and freed them in exchange for their loyalty, a mission she saw through until the very end. More than just going after the throne because she felt it was rightfully hers, Dany truly wanted to be a beloved leader and do right by the people by offering peace and equality throughout the Seven Kingdoms. Obviously, we all know how that turned out.

Bernie Sanders has similar ideas that consist of him taking the power away from the “one percent.” He may not have dragons or an army of unsullied behind him, but Sanders has inspired a movement that has gotten more young people in our country involved in politics. Even though he may never sit behind that oversized desk in the Oval Office, like Dany, he has made a big difference.

Michael Cohen Would Be Tyrion

Tyrion was always able to fix things. Not only would he be able to get himself out of a tight spot but others around him as well. This, in addition to his high intelligence, made him the ideal Hand of the Queen for both Cersei and Dany. Unfortunately, this role also required that he often make some difficult decisions, several which landed him in jail. He was lucky enough to still be alive at the end of the show, even being promoted to Hand of the King, but he never had a problem doing what was best for the kingdom. (Unless, of course, he had to choose between the kingdom and his brother in which he always chose Jaime.) Even if it meant committing treason and possibly being fried by Daenerys’ dragon.

While Michael Cohen’s official title only described him as Trump’s lawyer, he was better known more for being Trump’s “fixer.” Unfortunately, when you live in a country that doesn’t rely on a monarchy, this can get you into a bit of trouble. Both Cohen and Trump made the mistake of thinking they could do whatever they wanted, simply because Trump was elected president. Since Cohen is now sitting behind bars and Trump may soon follow, they’re likely starting to realize that our country doesn’t work that way. If only Cohen were half as smart as Tyrion, he may have been able to avoid jail time.

The world is devastated by the news that Britain’s Prince Philip, the Duke of Edinburgh, has died at the age of 99. Palace media confirms that the Duke has expired mid-day today, April 9th. The announcement did not contain any specifics on the cause of death. The United Kingdom will enter a state of national… END_OF_DOCUMENT_TOKEN_TO_BE_REPLACED

Who would have known that religious prophets would be among the most loyal supporters of former President Trump? In fact, it has been observed that the most conservative Christians may have been the right amount of push for Trump’s presidential win back in 2016. Since Trump’s election back in 2016, numerous self-proclaimed “prophets” have been… END_OF_DOCUMENT_TOKEN_TO_BE_REPLACED

President Biden falls and slips multiple times on the Airforce One Steps and PEOPLE ARE GOING CRAZY! What’s the big deal? Some people are hating, while others are making memes just for the fun of it. We are all human, aren’t we? Everyone’s expected to stumble some time in their lives. However, with the internet… END_OF_DOCUMENT_TOKEN_TO_BE_REPLACED