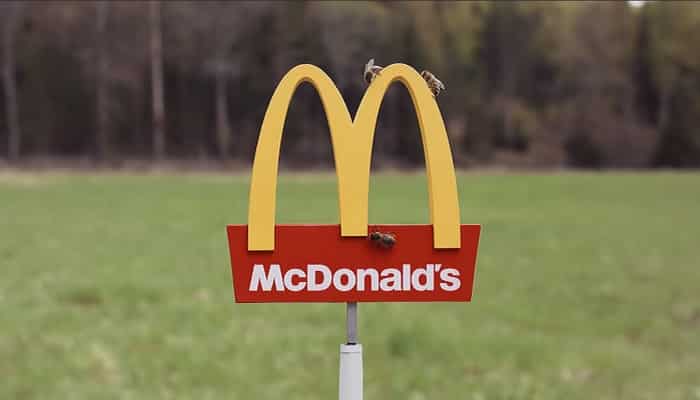 In a long enough timeline, everything we have built will be reduced to ashes and our legacy as a species forgotten… but not McDonald’s. There will always be a McDonald’s branch no matter where you are in the universe. Now, there’s actually a McDonald’s for other species as well– for bees nonetheless! It’s dubbed the “world’s smallest McDonald’s.”

They call it the McHive (of course), and it has set a new world record for the smallest McDonald’s branch, or even the smallest fast food branch ever. The McHive, as you may have guessed, is no larger than a beehive and was made to look like a miniature McDonald’s. Inside, however, is a legion of hardworking drones and their queen along with their honeycombs.

The McHive was designed in Sweden by Nicklas Nilisson for a charity fundraiser for Ronald McDonald House Charities. The said non-profit charity organization associated with McDonalds has a goal of supporting local communities. As we all know, bees are essential for our ecosystem and losing them would be catastrophic.

Not The Bees! GIF from Bees GIFs

“We have a lot of really devoted franchisees who contribute to our sustainability work, and it feels good that we can use our size to amplify such a great idea as beehives on the rooftops – this miniature McDonald’s is a tribute to franchisee Christina Richter’s initiative,” says Christoffer Rönnblad of McDonalds Sweden.

That’s why the world’s smallest McDonald’s, or McHive was invented– as an act of solidarity for people who place bees on their rooftops for the environment. The McHive also went up for an auction and was sold to a bidder for over $10,000. No matter how you look at it, the McHive is the bee’s knees and can inspire a greener and healthier environment.

The US arms sale industry is large and successful. More than 30% of exported weapons in the world come from the United States. They supply to no less than 90 nations making it one of the largest suppliers of weapons in the world. The US makes an estimate of almost 200 Billion dollars in annual… END_OF_DOCUMENT_TOKEN_TO_BE_REPLACED

Now that the election results are almost final, we all want to ask what’s going to happen to Donald Trump after leaving the office? All US Presidents inevitably reach the point where they leave the White House.  Besides, the constitution states that all US Presidents are subject to a two-term limit. What do former presidents… END_OF_DOCUMENT_TOKEN_TO_BE_REPLACED

This is the first time in modern history that the US held presidential elections in the middle of a pandemic. In truth, the US elections may have overshadowed COVID-19 and the side effects are limitless. America is facing a tough crisis of discontentment with the current administration. An understandable case but a situation that may… END_OF_DOCUMENT_TOKEN_TO_BE_REPLACED