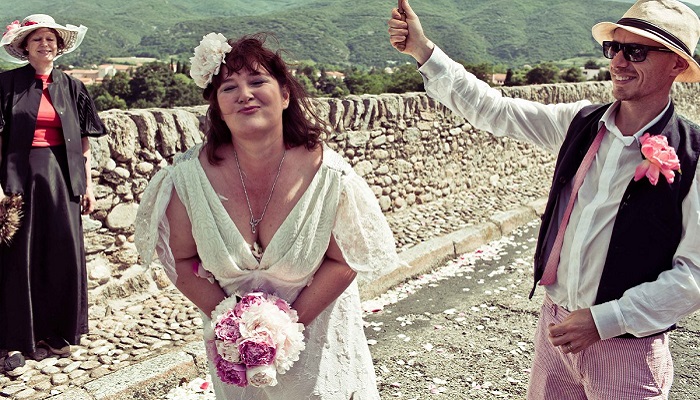 Falling in love with objects is not exactly a rare and weird thing. Why, men do it all the time with their cars and their watches, one of them even copulated with an actual car. Which is why it’s probably normal to hear about a nice young Australian woman falling in love with and marrying a bridge… right?

Jodi Rose from Sydney, Australia, is happily in a relationship and married even. Her “significant other” is, according to her, “handsome… strong, and sturdy,” the ideal partner by any standard. “He” is also French, and his name is Le Pont du Diable, which translates to The Devil’s Bridge– an odd name for a person, but he’s no person; he’s a bridge. It’s a love not entirely unheard of:

The Australian woman apparently met monsieur Le Pont du Diable in France back in 2013 (not that he could be anywhere else). It was love at first sight and Jodi seems to cherish Le Pont du Diable’s chiseled… appearance. So, the Australian woman married him and the town of Saint-Jean-de-Fos was there to bear witness. The objections between in-laws? All water under the bridge…

If it’s not too obvious enough for you, Jodi and Le Pont’s relationship is unusual… because of their age gap. Jodi is a modern woman, while Le Pont du Diable was uh, born in the 14th century. That means he’s older than her by around 700 years– but hey, they made it work and got married. Jodi had her ring, and Le Pont also had his… a bigger one, albeit:

“He makes me feel connected to the earth and draws me to rest from my endless nomadic wanderings. He is fixed, stable, rooted to the ground, while I am nomadic, transient, ever on the road,” explained Jodi. Well, what do you know, opposites do attract, as for *ahem* children, Jodi and Le Pont will cross the bridge when they get there, okay?

Urine For A Treat: Yoga Master Snorts His Own Pee, Says It Boosts His Sex Life & Health