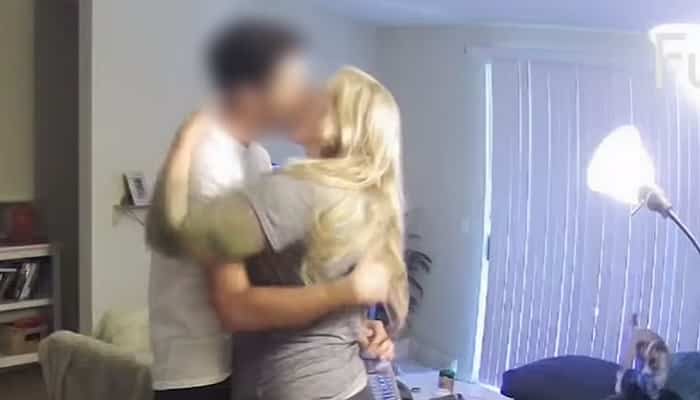 Dogs can be just as demanding as children and need to be taken care of in a similar manner. That’s why dog and other pet sitters exist just as babysitters do. However, leaving them in the care of strangers might not be the best for them. One dog sitter even took advantage of the situation and invited over her boyfriend for an “added challenge” in her sitting work.

26-year-old Casey Brengle from California, US was the dog sitter in question. She was actually hired by dog owner Rosie Brown who was out to attend her cousin’s wedding which took four days. Brown found Brengle through an app called Wag! which offers the services of dog sitter professionals. Little did Brown know, Brengle was up to something.

Apparently, Brengle knew that security cameras were present in Brown’s home, but this did not deter the dog sitter from inviting over her boyfriend for the most obvious of reasons. Their act of copulation was not exactly caught on camera, only what appears to be foreplay and kissing, as well as Brengle coming out from one of the rooms fully naked.

Additionally, Brengle can be heard shouting and calling one of the dogs she was supposed to care for a “b*tch” and only taking them out five minutes a day for potty walks instead of what she agreed on for the total price of $315. Despite being caught on camera, Brengle still tried to justify her actions:

As a result, Brengle was suspended by Wag! for not following the app’s Community Guidelines and for not acting professionally.

The US arms sale industry is large and successful. More than 30% of exported weapons in the world come from the United States. They supply to no less than 90 nations making it one of the largest suppliers of weapons in the world. The US makes an estimate of almost 200 Billion dollars in annual… END_OF_DOCUMENT_TOKEN_TO_BE_REPLACED

Now that the election results are almost final, we all want to ask what’s going to happen to Donald Trump after leaving the office? All US Presidents inevitably reach the point where they leave the White House.  Besides, the constitution states that all US Presidents are subject to a two-term limit. What do former presidents… END_OF_DOCUMENT_TOKEN_TO_BE_REPLACED

This is the first time in modern history that the US held presidential elections in the middle of a pandemic. In truth, the US elections may have overshadowed COVID-19 and the side effects are limitless. America is facing a tough crisis of discontentment with the current administration. An understandable case but a situation that may… END_OF_DOCUMENT_TOKEN_TO_BE_REPLACED