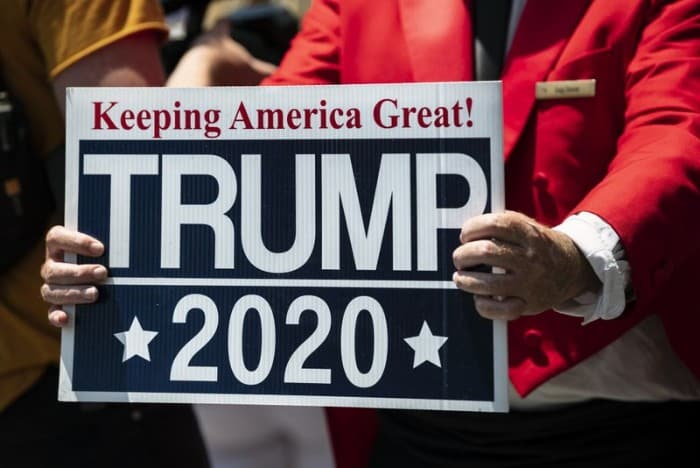 Donald Trump aims to raise a record-breaking $1 billion for his 2020 presidential campaign, which is three times more than what was raised for his 2016 campaign. The Republican party has already begun to appeal to wealthy donors with dinners that cost $15k per plate. If they want a picture with the president, the cost of their plate goes up to $50k and if they want to join the man in a roundtable discussion they’ll have to cough up $150k. That leaves us wondering what the hell Trump plans to spend $1 billion on to help his 2020 campaign.

1. To Cover The Salary Of His Advisors

When a job comes with a high risk of ending up in prison, the salary will have to be more than appealing to get anyone to accept it. A huge chunk of change raised by Trump’s campaign will likely need to be set aside to pay these salaries or for a sign on bonus at the very least. Otherwise, he’ll never be able to find someone to work with him.

Melania hasn’t left her cheating, sexist, pig of a husband. At least, not yet. There’s absolutely no way that she isn’t being paid to stand by Trump’s side until he’s out of office. If he’s going to require that Melania sticks around for his campaign and another four years, she will likely expect an increase in her monthly stipend.

What’s a Trump campaign without overstocking his online store with cheap yet overpriced, foreign-made, MAGA hats? He might have to pay extra for the tags to read “Made in America” since he’s all about keeping jobs in the country. Campaign funds may also be required to pay for employees to sift through shipments and remove all notes hidden in the boxes by the Chinese begging for help from unsafe and life-threatening work conditions.

Without Melania hanging around the White House anymore, it’s safe to say that Trump has had to dig deep in his pockets to pay for female companion. Not his own pockets, of course. As taxpayers, it’s our duty to fund our president’s sexual exploits and it seems that he will be using donations from his campaign if he is actually elected again.

Hopefully, Trump has learned his lesson about having others pay his hush money tabs to the women he beds. Since he’s not the kind of guy to spend his own money, he’ll likely put aside some of the campaign funds that are raised just in case he ends up needing it. Knowing the kind of man Trump is, he’ll definitely need it.

One of Trump’s biggest flaws is the insane amount of money it costs taxpayers for him to spend a weekend golfing in Mar-a-Largo. In an attempt to increase his approval rating, Trump may be aiming to raise more campaign funds this time around to finance his golf outings and make it appear like he’s saving us money.

7. To Pay For Russian Election Interference

Even though Russian election interference was discovered soon after Trump was elected and prevention measures have been taken, there are more ways to get into American heads than through Facebook. Who knows how Russians will be interfering this time around, but they’ll certainly be charging Trump’s campaign more than they did in 2016. Maybe this time they’ll place subliminal messages in our favorite Netflix shows and radio stations.

How The Fox News Effect Causes Ignorance Among Conservatives

The world is devastated by the news that Britain’s Prince Philip, the Duke of Edinburgh, has died at the age of 99. Palace media confirms that the Duke has expired mid-day today, April 9th. The announcement did not contain any specifics on the cause of death. The United Kingdom will enter a state of national… END_OF_DOCUMENT_TOKEN_TO_BE_REPLACED

Who would have known that religious prophets would be among the most loyal supporters of former President Trump? In fact, it has been observed that the most conservative Christians may have been the right amount of push for Trump’s presidential win back in 2016. Since Trump’s election back in 2016, numerous self-proclaimed “prophets” have been… END_OF_DOCUMENT_TOKEN_TO_BE_REPLACED

President Biden falls and slips multiple times on the Airforce One Steps and PEOPLE ARE GOING CRAZY! What’s the big deal? Some people are hating, while others are making memes just for the fun of it. We are all human, aren’t we? Everyone’s expected to stumble some time in their lives. However, with the internet… END_OF_DOCUMENT_TOKEN_TO_BE_REPLACED