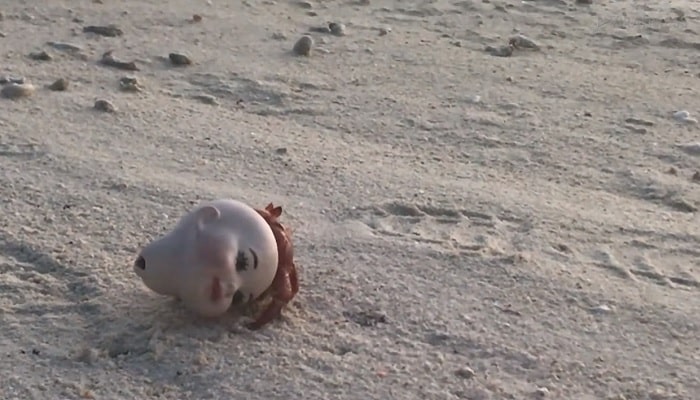 One man’s trash can be another animal’s treasure, though that doesn’t justify the excessive waste we dump at the environment. Some animal species, however, have proven to be more creative than we ever could be at recycling. One hermit crab is the perfect example of this as he found refuge in the scariest human garbage yet.

Environmental project volunteer Joseph Cronk was walking along the shores of Wake Island in the western Pacific Ocean one morning when he came upon something cute and horrific at the same time. He saw a severed doll’s head which suddenly began moving on its own. Upon closer inspection, Cronk realized that it had been claimed by a hermit crab:

Hermit crabs are known to change their shells or home whenever they get too big. It just so happens that the “shell” this particular hermit crab found was a severed baby doll head. While such a scene was alarming since it indicates how polluted the beaches are, Cronk simply couldn’t remove the hermit crab’s improvised home since it might die.

“I see a lot of these crabs exchanging their shells for many things. Film canisters and soda cans are pretty common. But this one really gets the point across,” claimed Cronk.

Prior to that, Cronk also visited the island last December for an earlier clean-up project. By the time he returned this May, the trash has already piled up. You know it’s that bad when even the animals are helping us clean and recycle our garbage.

The Blood Test, The Swab Test, and The Saliva Test      Essentially, there are three general types of COVID-19 testing produced so far. One is the rapid test, the second is the saliva test and the other is the swab test. The rapid test (also known as the anti-body test) uses blood samples. The swab test… END_OF_DOCUMENT_TOKEN_TO_BE_REPLACED

The COVID-19 pandemic is one of the biggest modern pandemics known in history. Currently, there are more than five million confirmed cases in the world, with a total of 333,000 deaths. A total of 1.6 million of these confirmed cases are in the US alone. The world is currently in a race of finding a… END_OF_DOCUMENT_TOKEN_TO_BE_REPLACED

Despite concrete data and research, people’s opinions will always be diverse when it comes to a variety of topics including religion, politics, gender, and more. Denial is a common reaction to many important discussions and serious world events. The COVID-19 pandemic does not differ from any issues and is subject to opinions from critiques all… END_OF_DOCUMENT_TOKEN_TO_BE_REPLACED

Back in January, when the Wuhan, China coronavirus broke out, it didn’t make it to the front page of newspapers, in print or virtual form. Today, January feels like a lifetime away. Like it or not, people around the world have adapted to the new normal – staying at home, frequent hand washing, and social… END_OF_DOCUMENT_TOKEN_TO_BE_REPLACED

Since the beginning of the year 2020, the whole world has been stupefied by the rapid spread of a deadly coronavirus known as COVID-19. World superpowers in the West were unable to prevent the virus from reaching their borders. Because of this fact, the novel coronavirus COVID-19 became a world-wide pandemic no less than three… END_OF_DOCUMENT_TOKEN_TO_BE_REPLACED

For months since the start of 2020, the attention of the world has focused on immediate response efforts to contain and combat the novel coronavirus, also known as COVID-19. The deadly virus has pushed millions of people into isolation.  This kept people in their homes for weeks and months away from their work, their friends,… END_OF_DOCUMENT_TOKEN_TO_BE_REPLACED