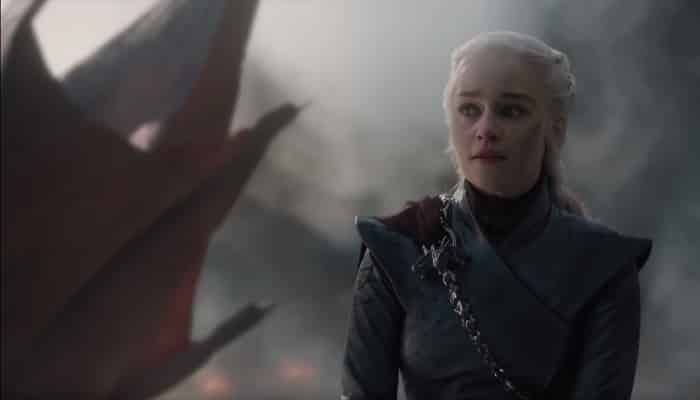 Naming a baby after a character in an unfinished television show might not exactly be the best for the child. It just so happens that two of the most popular girl baby names now are either “Khaleesi” or “Daenerys,” based on a strong female character in Game of Thrones who just recently <SPOILERS> massacred millions of innocent peasants because of a tantrum.

The latest episode (Season 8, episode 5) of HBO’s Game of Thrones took a much darker path for Daenerys Targaryen’s character development… or the lack thereof. In fact, some might argue that it’s not exactly a development– the writers straight up ruined her savior and just ruler image. Imagine Jesus suddenly becoming Hitler in one day, that’s how bad it was.

Deal With It GIF from Gameofthrones GIFs

That’s because Daenerys finally snapped and used her remaining dragon to kill everyone in King’s Landing– unjustifiably so, earning her new and most recent unofficial title: Mad Queen. As a result, thousands of mothers who named their babies after her back when she was still sane might now be regretting their choice for more or less 3,500 babies who were named either “Khaleesi” or “Daenerys.”

When You Make A Big Mistake GIF from Theoffice GIFs

Thankfully, Khaleesi is easily rectifiable since it’s a title reserved for Dothraki queens. Daenerys, however… good luck explaining to your child why they shouldn’t be heartbroken once they’re old enough to watch Game of Thrones.

Of course, it’s not just the mothers who are completely dissatisfied with how Daenerys was handled by the showrunners. Season 5, Episode 8, titled “The Bells,” is now the official record holder for the lowest rating ever for an episode in Game of Thrones. Meanwhile, those who named their baby girls “Arya” remain the best.

The Blood Test, The Swab Test, and The Saliva Test      Essentially, there are three general types of COVID-19 testing produced so far. One is the rapid test, the second is the saliva test and the other is the swab test. The rapid test (also known as the anti-body test) uses blood samples. The swab test… END_OF_DOCUMENT_TOKEN_TO_BE_REPLACED

The COVID-19 pandemic is one of the biggest modern pandemics known in history. Currently, there are more than five million confirmed cases in the world, with a total of 333,000 deaths. A total of 1.6 million of these confirmed cases are in the US alone. The world is currently in a race of finding a… END_OF_DOCUMENT_TOKEN_TO_BE_REPLACED

Despite concrete data and research, people’s opinions will always be diverse when it comes to a variety of topics including religion, politics, gender, and more. Denial is a common reaction to many important discussions and serious world events. The COVID-19 pandemic does not differ from any issues and is subject to opinions from critiques all… END_OF_DOCUMENT_TOKEN_TO_BE_REPLACED

Back in January, when the Wuhan, China coronavirus broke out, it didn’t make it to the front page of newspapers, in print or virtual form. Today, January feels like a lifetime away. Like it or not, people around the world have adapted to the new normal – staying at home, frequent hand washing, and social… END_OF_DOCUMENT_TOKEN_TO_BE_REPLACED

Since the beginning of the year 2020, the whole world has been stupefied by the rapid spread of a deadly coronavirus known as COVID-19. World superpowers in the West were unable to prevent the virus from reaching their borders. Because of this fact, the novel coronavirus COVID-19 became a world-wide pandemic no less than three… END_OF_DOCUMENT_TOKEN_TO_BE_REPLACED

For months since the start of 2020, the attention of the world has focused on immediate response efforts to contain and combat the novel coronavirus, also known as COVID-19. The deadly virus has pushed millions of people into isolation.  This kept people in their homes for weeks and months away from their work, their friends,… END_OF_DOCUMENT_TOKEN_TO_BE_REPLACED