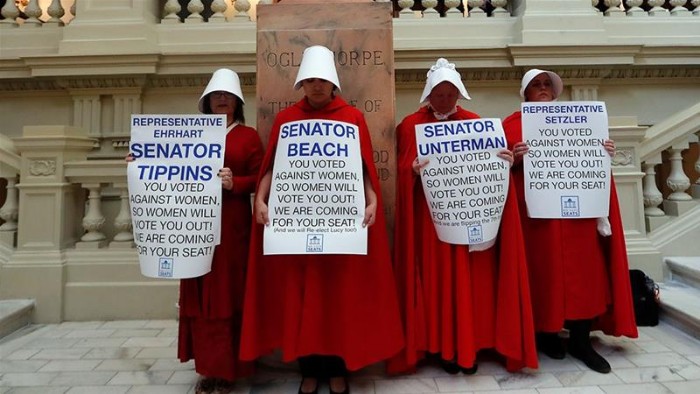 Fetal heartbeat laws are being enacted in Republican states throughout the country, making abortions after six weeks illegal in Ohio, Georgia, Kentucky, and Mississippi. For those of you without ovaries, the chances of knowing you’re pregnant that early is nearly impossible and would force every girl or woman with an unwanted pregnancy to seek out abortion treatments elsewhere. If they have the ability to travel, they can go to a state with more lenient laws, however, if this is discovered they will be looking at 10 years in prison. Additionally, young girls who are still in high school will be more likely to unknowingly get help from illegal and unsafe underground abortion clinics leading to severe injury and death.

While most men might not care and think women affected by these laws are just SOL, they have another thing coming. These #AbortionBan tweets explain how heartbeat laws will affect men as well.

Ladies Are Calling Men Out

With women’s healthcare and reproduction rights being threatened, women are calling out the men in their lives to speak up. Sitting back and doing nothing simply because these laws don’t affect you is no longer acceptable. Either support women or expect to face the consequences.

Jobs Will Be Lost

A boycott has already begun in Georgia and will likely spread to other states who’ve passed these ridiculous abortion laws. One of the most notable boycotts comes from Hollywood, as numerous production companies are taking action by changing the filming location of dozens of movies and TV shows that have been filming in the state. This will be a huge loss for the people of Georgia who have relied on these jobs for decades. Both men and women will find themselves on unemployment once this law goes into effect.

Men Will Get Laid Less

Alyssa Milano has inspired a sex strike in hope that getting laid less often will get some of these men to step up and support women’s reproductive rights. If women are going to be forced to have children they don’t want, the only guaranteed thing that would prevent this is to stop having sex. As many of us already know, condoms, birth control pills, and other contraceptives don’t always work. Whether we’re single, dating, or married, this is the only way women in states with an #AbortionBan have control over their bodies.

Men Will Have To Pay For Healthcare

Men and boys are going to be held legally responsible for the healthcare costs of pregnancy and childbirth, which should be how it is anyway. However, when we’re talking about teen pregnancies, both the boy and the girl will have to put their education aside to get jobs and earn money to handle their bills and newborn. Then, the additional costs that no kid earning minimum wage will be able to cover will fall on the shoulders of their parents. Parents who are likely already struggling to pay their bills and living paycheck to paycheck like everyone else in the country. In addition to two teenagers getting government assistance, suddenly the parents are in need of assistance as well, costing taxpayers a ton of money.

Men Will Be Responsible For Paying Child Support

Once the baby is born, these bills only get higher and men aren’t going to get away with buying a few boxes of diapers each month anymore. They also can’t just walk away and force the women they impregnate to raise these children on their own. Instead, men will find themselves financially responsible for their child’s well being and can expect child support payments to be taken right out of their paycheck each week. Many states already issue warrants of arrest when men don’t pay their child support. Hopefully, they give them 10 years just like they plan to give women who get abortions.

The government might be able to force women to give birth, but they can’t force us to take care of unwanted children. Just like teenage boys and grown men abandon their children every day, we will definitely see an increase in women leaving their kids behind. This will lead to more grandparents raising their grandkids, packed orphanages and foster homes, and a significant increase in single fathers.

Men Will Finally Be Held Accountable

Currently, men have sex with no accountability. If the woman gets pregnant, it’s not their problem. These new laws will encourage more women to hold these men accountable. Before, men who refused to take responsibility for their children were just deadbeat dads. With these new anti-abortion laws put in place, women will have more ground to stand on in order to take legal action against their baby-daddies. While a $1 million fine as suggested in this tweet is overkill, we can definitely expect women to be suing men for using insufficient contraceptives, lying about infertility, and basically leading to a pregnancy that no one wanted.

Teens Will Need To Get Parental Permission

An abortion ban would leave many of the parents to expecting teens stuck paying for doctors appointments, formula, diapers, clothes, and everything else a child needs. If they’re going to be forced by this abortion ban to be financially responsible for their grandchild, then this tweet isn’t too far fetched. To prevent this, parents might start to require their teenagers under the age of 18 to get their written permission to have sex. Without this, they may be able to legally get out of paying to raise their grandchildren, leaving the costs up to their underage parents and our government.

It Will Affect The Women In Your Life

Men who live in the states that have enacted an #AbortionBan will see these laws affect the women in their lives. You will see mothers, sisters, daughters, partners, colleagues, and friends suffer from having to carry out unwanted pregnancies, travel out of state or country to receive the healthcare they should already have the rights to, die from unsafe underground abortion procedures, be interrogated by police after a miscarriage, and spend time in prison for having an abortion or assisting others in getting one. No decent human being could stand by and do nothing while seeing this happen to the women in their lives.

The world is devastated by the news that Britain’s Prince Philip, the Duke of Edinburgh, has died at the age of 99. Palace media confirms that the Duke has expired mid-day today, April 9th. The announcement did not contain any specifics on the cause of death. The United Kingdom will enter a state of national… END_OF_DOCUMENT_TOKEN_TO_BE_REPLACED

Who would have known that religious prophets would be among the most loyal supporters of former President Trump? In fact, it has been observed that the most conservative Christians may have been the right amount of push for Trump’s presidential win back in 2016. Since Trump’s election back in 2016, numerous self-proclaimed “prophets” have been… END_OF_DOCUMENT_TOKEN_TO_BE_REPLACED

President Biden falls and slips multiple times on the Airforce One Steps and PEOPLE ARE GOING CRAZY! What’s the big deal? Some people are hating, while others are making memes just for the fun of it. We are all human, aren’t we? Everyone’s expected to stumble some time in their lives. However, with the internet… END_OF_DOCUMENT_TOKEN_TO_BE_REPLACED