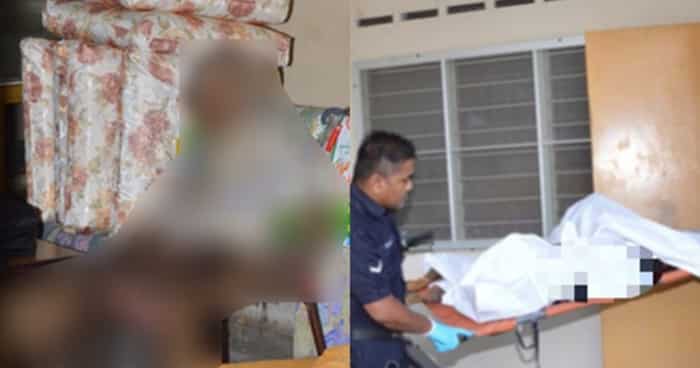 A 40-year-old man diagnosed with depression was discovered living with his mother’s decomposing corpse for approx four months.

Reportedly, the man was the only person who resided with his mother since his father perished in an accident many years ago. When authorities arrived at the scene several days back, the mother’s decomposing corpse was found. The son explained his 85-year-old mother lost consciousness after consuming a meal on January 13th. He then let his mum sit on the chair she died on, and teman her every passing day. He even devoured his meals while seated next to her decaying body! While the elderly woman’s body rotted, he detected that it was releasing a vile odor, so he shut the windows and doors to prevent the smell from exiting, as well as the bugs from entering.

The man’s cousin had attempted to visit her in April, but was stopped by him, reports state. However, on May 10th, she chose to revisit her aunt, only to learn from the son that the old lady had passed on some time ago. The visiting cousin promptly reported the situation to the police. One of the neighbors claimed that in April she did notice a nauseating smell around the residence, but she presumed it was the old lady’s feces and urine. She too witnessed the elderly lady’s son pour away a container full of yellow fluid, though it turns out that it may have been fluid from the maggoty corpse.

From observations, no suspicious wounds or scars were seen on the corpse. It was sent to the Hospital Tangkak morgue for an autopsy and additional investigation. According to reports, the man is the only son in the family and was the only individual who attended the wake of his mother. Law enforcement said that this case is regarded as natural death, therefore no one would be arrested or imprisoned.

Woman Hid And Lived With Dead Mother’s Body; Her Reason Will Haunt You

Dead Bodies Can Attend Their Own Funerals With ‘Extreme Embalming’

The Blood Test, The Swab Test, and The Saliva Test      Essentially, there are three general types of COVID-19 testing produced so far. One is the rapid test, the second is the saliva test and the other is the swab test. The rapid test (also known as the anti-body test) uses blood samples. The swab test… END_OF_DOCUMENT_TOKEN_TO_BE_REPLACED

The COVID-19 pandemic is one of the biggest modern pandemics known in history. Currently, there are more than five million confirmed cases in the world, with a total of 333,000 deaths. A total of 1.6 million of these confirmed cases are in the US alone. The world is currently in a race of finding a… END_OF_DOCUMENT_TOKEN_TO_BE_REPLACED

Despite concrete data and research, people’s opinions will always be diverse when it comes to a variety of topics including religion, politics, gender, and more. Denial is a common reaction to many important discussions and serious world events. The COVID-19 pandemic does not differ from any issues and is subject to opinions from critiques all… END_OF_DOCUMENT_TOKEN_TO_BE_REPLACED

Back in January, when the Wuhan, China coronavirus broke out, it didn’t make it to the front page of newspapers, in print or virtual form. Today, January feels like a lifetime away. Like it or not, people around the world have adapted to the new normal – staying at home, frequent hand washing, and social… END_OF_DOCUMENT_TOKEN_TO_BE_REPLACED

Since the beginning of the year 2020, the whole world has been stupefied by the rapid spread of a deadly coronavirus known as COVID-19. World superpowers in the West were unable to prevent the virus from reaching their borders. Because of this fact, the novel coronavirus COVID-19 became a world-wide pandemic no less than three… END_OF_DOCUMENT_TOKEN_TO_BE_REPLACED

For months since the start of 2020, the attention of the world has focused on immediate response efforts to contain and combat the novel coronavirus, also known as COVID-19. The deadly virus has pushed millions of people into isolation.  This kept people in their homes for weeks and months away from their work, their friends,… END_OF_DOCUMENT_TOKEN_TO_BE_REPLACED