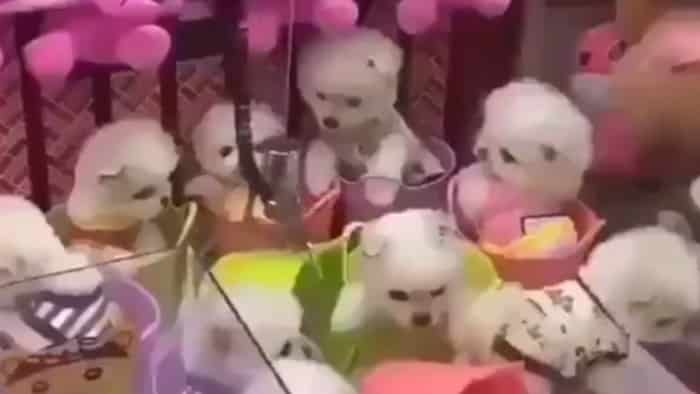 An arcade claw grabber in question displays what seem to be actual living pups up for clinching inside the glass container.

The footage exhibits the pooches crammed into small buckets as the sizable metal claw drops down and nabs at them. At the video‘s end, an individual can be seen retrieving one of the dogs and holding it in their hands. It’s not certain when or where the footage was taken, however biologist, Daniel Schneider, posted the video on Twitter with a caption: “Some of those puppies in that game in #Japan are real. WTF. RT. #BeKindToAnimals” Though, it has too been reported that the video may originate from China. Nevertheless, the clip poses serious animal welfare inquiries. Beyond the evident peril posed by the claw, the pups could well be held in unsanitary circumstances and do not have enough space. Additionally, the gifting of canines as prizes does not take into account the amount of responsibility that comes with owning a pet dog, and as such, makes the animals susceptible to neglect.

Director of animal rights group PETA, Elisa Allen, described the footage as ‘a matter of life and death’. Speaking to reporters, she stated: “Animals aren’t disposable toys, and PETA urges Chinese authorities to look into this video as a matter of urgency – if the dogs are real, it’s not a harmless arcade claw grabber but rather a matter of life and death. Live animals – including lobsters, turtles, and crabs – are commonly sold in claw machines across China.

“They can easily be hurt by being repeatedly dropped, and some have been left to endure a painful death from dehydration or starvation.” Responding to the clip on Twitter, folks were just as disgusted. One tweeter said: “That is so cruel! And what if that thing poke out one or both of their eyes?????” Another stated: “That is horrible. Poor things must be terrified.” A third furthered: “Can we just stop producing humans already?”

For anyone wondering who this MyPillow guy is, this article will tell you all about him and his role in Trump’s last struggle for power. It is almost second nature for the internet to find humor in many serious events in government. Could this be this generation’s way of coping? We don’t really know. Let’s… END_OF_DOCUMENT_TOKEN_TO_BE_REPLACED

Trump is the First American President who gets impeached for the second time. Trump’s second impeachment became a trending topic on Twitter after the terrifying terrorist attack on Capitol Hill on the 6th of January. Twitter is at it again, being flooded with memes and Twitter jokes surrounding Trump’s second impeachment trial. Americans are trying to… END_OF_DOCUMENT_TOKEN_TO_BE_REPLACED