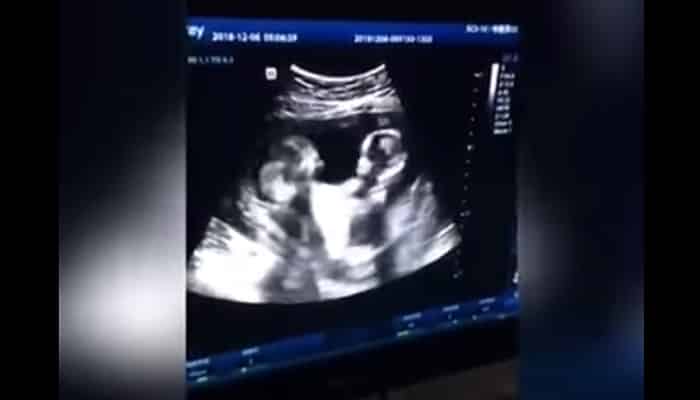 One of the most universal laws in the universe today is that: Siblings. Will. Always. Fight… okay maybe it’s not a law, but it almost always happens. Twins are no exception to this rule especially since they have to share a lot of things. In fact, a pair of sisters in China might have already set a record for the world’s youngest sibling fight thanks to an ultrasound footage.

The twin sisters Tao Yimo and Tao Yi’an are the siblings in question. The two were recently born this year but some of their collected ultrasound footage while they were still in the womb might have already prepared their parents for the inevitable future. It was their father, Tao Yu, who took the footage and uploaded it:

The said ultrasound footage shows some energetic activity even though the twin sisters are still inside. It appears as if they are boxing, pushing, and kicking each other for more space. Sadly, and obviously, there’s no audio for the ultrasound footage. Still, we can safely assume either of them is probably telling the other that there’s only space in the womb for one princess.

As such, Tao Yimo and Tao Yi’an have gone viral for their assumed unborn bickering. Goodness knows what headaches they’ll be dealing with their parents once they can speak and walk. Their names actually mean “Strawberry” and “Cherry,” by the way.

Even when during labor, both Strawberry and Cherry proved quite troublesome for their mother. That’s because they were MoMo (monochorionic monoamniotic) twins who share the same placenta. Their odds of survival were actually one in 30 million since their umbilical cords could choke one or both of them.

That means despite their bickering, they are still miracle babies. As for who’s more miraculous between the two, they’ll probably fight over it too.

The world is devastated by the news that Britain’s Prince Philip, the Duke of Edinburgh, has died at the age of 99. Palace media confirms that the Duke has expired mid-day today, April 9th. The announcement did not contain any specifics on the cause of death. The United Kingdom will enter a state of national… END_OF_DOCUMENT_TOKEN_TO_BE_REPLACED

Who would have known that religious prophets would be among the most loyal supporters of former President Trump? In fact, it has been observed that the most conservative Christians may have been the right amount of push for Trump’s presidential win back in 2016. Since Trump’s election back in 2016, numerous self-proclaimed “prophets” have been… END_OF_DOCUMENT_TOKEN_TO_BE_REPLACED

President Biden falls and slips multiple times on the Airforce One Steps and PEOPLE ARE GOING CRAZY! What’s the big deal? Some people are hating, while others are making memes just for the fun of it. We are all human, aren’t we? Everyone’s expected to stumble some time in their lives. However, with the internet… END_OF_DOCUMENT_TOKEN_TO_BE_REPLACED