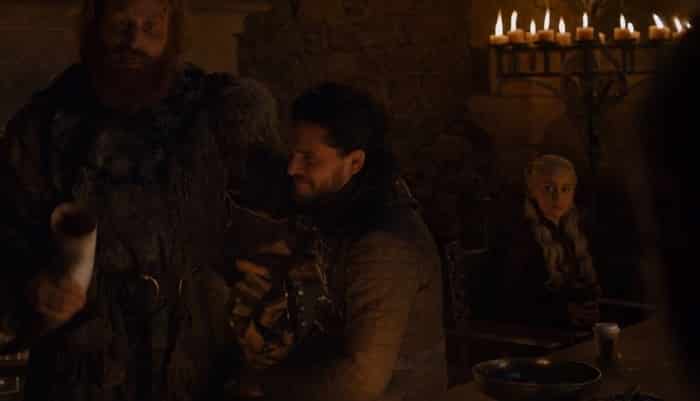 One might wonder how Daenerys Targaryen keeps up with her daily schedule of tending to her dragons, plotting to dethrone Cersei, and putting up with the fact that she shagged her own nephew. Turns out, she prepares for all that with a nice and warm coffee cup from Starbucks– as seen in the latest episode of HBO‘s Game of Thrones.

We’re not kidding. Some eagle-eyed fans spotted a coffee cup near Daenerys (Emilia Clarke) in episode 4 of season 8. Since everything shown in the final cut of the Game of Thrones episodes is supposedly canon, then that is now part of the show and part of the lore, it is known:

That right there is the coffee cup of Daenerys Targaryen, First of her Name, the rightful Queen of the Andals, the Rhoynar, and the First Men, Breaker of Chains, Protector of the Seven Kingdoms, The Unburnt, The Queen Across The Sea, Mother of Dragons, Khaleesi of the Great Grass Sea… Drinker of the Grande Latte.

That was quite exhausting, and it’s probably what’s written in the coffee cup too. Also, it’s probably the reason Emilia Clarke had to drink her coffee on set, Starbucks might have taken too long to assemble her order because of all the titles.

In all seriousness, it’s not clear who the Starbucks coffee cup belonged to, and props to Emilia Clarke and everyone on the scene for not getting too distracted with an alluring beverage. It’s not clear what kind of coffee it was either or whether it was a lazy product placement for Starbucks. We will never know as No One was laying claim to it.

The Blood Test, The Swab Test, and The Saliva Test      Essentially, there are three general types of COVID-19 testing produced so far. One is the rapid test, the second is the saliva test and the other is the swab test. The rapid test (also known as the anti-body test) uses blood samples. The swab test… END_OF_DOCUMENT_TOKEN_TO_BE_REPLACED

The COVID-19 pandemic is one of the biggest modern pandemics known in history. Currently, there are more than five million confirmed cases in the world, with a total of 333,000 deaths. A total of 1.6 million of these confirmed cases are in the US alone. The world is currently in a race of finding a… END_OF_DOCUMENT_TOKEN_TO_BE_REPLACED

Despite concrete data and research, people’s opinions will always be diverse when it comes to a variety of topics including religion, politics, gender, and more. Denial is a common reaction to many important discussions and serious world events. The COVID-19 pandemic does not differ from any issues and is subject to opinions from critiques all… END_OF_DOCUMENT_TOKEN_TO_BE_REPLACED

Back in January, when the Wuhan, China coronavirus broke out, it didn’t make it to the front page of newspapers, in print or virtual form. Today, January feels like a lifetime away. Like it or not, people around the world have adapted to the new normal – staying at home, frequent hand washing, and social… END_OF_DOCUMENT_TOKEN_TO_BE_REPLACED

Since the beginning of the year 2020, the whole world has been stupefied by the rapid spread of a deadly coronavirus known as COVID-19. World superpowers in the West were unable to prevent the virus from reaching their borders. Because of this fact, the novel coronavirus COVID-19 became a world-wide pandemic no less than three… END_OF_DOCUMENT_TOKEN_TO_BE_REPLACED

For months since the start of 2020, the attention of the world has focused on immediate response efforts to contain and combat the novel coronavirus, also known as COVID-19. The deadly virus has pushed millions of people into isolation.  This kept people in their homes for weeks and months away from their work, their friends,… END_OF_DOCUMENT_TOKEN_TO_BE_REPLACED