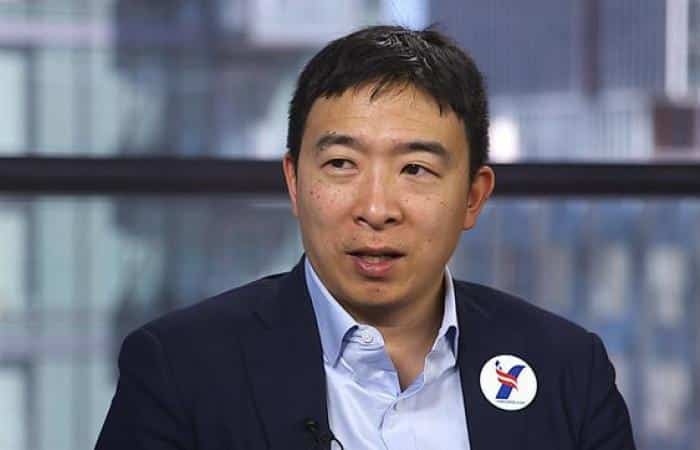 “Weed Day” may have come and gone, but there are many people out there who celebrate 4/20 all year long. Nearly 1/4 of the American population to be exact. With that in mind, presidential candidate Andrew Yang made a refreshing announcement last month that will have stoners rejoicing for sure.

On 4/20, Andrew Yang announced his plans for legalizing marijuana if he’s elected president in 2020. He also plans to let non-violent offenders off the hook and released from jail. In fact, he said he would high five them on their way out!

I’m for full legalization of marijuana. I would go a step further and on 4/20/2021, exactly two years from today, I would pardon everyone who’s in jail for a low-level, non-violent marijuana offense and I would high five them on their way out of jail.

History Of Marijuana Use In The U.S.

Marijuana has been around since the dawn of our country, as has our racist ways. Mexicans were one of the first to smoke weed to get high, and when they started immigrating to the U.S. in 1910 they brought this tradition along with them. To encourage prejudice against Mexicans and their culture, people were told that smoking weed gave them superhuman strength and turned them violent. They also spread rumors that Mexicans were offering the drugs to kids, so it was immediately made illegal. Good job America!

This makes sense as to why far more people of color are thrown in jail for smoking weed in our country. Jesse Williams explained it best in an interview on The Daily Show With Trevor Noah when he said:

Every movie we watch about coming of age, partying is what? It’s kids smoke, finds weed and drinking, both of which are totally illegal. But we accept it and we laugh at it ’cause it’s coming of age. But when it’s black kids doing it or poor kids doing it, they’re filling prisons … If you’re not gonna do it fairly, let’s decriminalize it.

If you weren’t already on board with Yang’s policies, then perhaps you need to learn a bit more. One of the most appealing plans he has is to implement a Universal Basic Income of $1,000 per month to any American over the age of 18. Umm, yes! Imagine what you could do with an extra $12,000 per year. Pay your bills on time for once, finish up your education, jump-start a new business, and so much more.

That’s just the time of the iceberg. Yang’s policies touch base on nearly every issue you can think of from LGBT rights and equal pay to providing healthcare for everyone and a limit to how long those on the Supreme Court can serve. It’s not only stoners who are rejoicing over Yang’s presidential campaign. Learn more about his policies and get on board!

These Potential 2020 Presidential Election Candidates Could Change The Game

Gift-giving isn’t just a seasonal affair between friends, families and acquaintances. The art of gift-giving is also conducted on a national scale with countries often sending each other big, weird and expensive gifts. Experts in all things gifts, Vanilla Reindeer put together some examples of these expensive and odd gifts that have been shared between… END_OF_DOCUMENT_TOKEN_TO_BE_REPLACED

There are lots of ways you can make Pres. Trump feel welcome: you can offer him coffee, or mow a penis into a field for him to view as his plane lands. The willie in question has been chopped by Born Eco ahead of the arrival of President Trump, who visited the UK Monday for… END_OF_DOCUMENT_TOKEN_TO_BE_REPLACED

The year isn’t even halfway over, yet Donald Trump has managed to make a fool of himself and our country countless times. From inviting the national college football champions, the Clemson Tigers, all the way to the White House for some McDonald’s to his to the dreaded results of Mueller’s investigation, it has been one… END_OF_DOCUMENT_TOKEN_TO_BE_REPLACED

Republicans have always said that when they gained control in Congress, they would work to overturn Roe v. Wade and here they are, cashing in on that promise one state at a time. So far, Alabama, Arkansas, Georgia, Kentucky, Missouri, and Ohio have all passed incredibly restrictive laws on abortions, making it illegal for women… END_OF_DOCUMENT_TOKEN_TO_BE_REPLACED

If you’re on Snapchat, then you’ve probably played around with (and were likely horrified by) their filter gender swap filters. While you’re probably using these filters to send hilarious pics to your friends, some guys using them to create Tinder profiles. What likely started out as a joke has quickly evolved, and these guys are… END_OF_DOCUMENT_TOKEN_TO_BE_REPLACED

“Milkshaking” is a hilarious trend in Britain where a milkshake is thrown at and ideally lands on a far-right politician or activist. The point of this nonviolence protest is to humiliate them without causing injury. Physical injury at least. There’s no doubt that milkshaking has led to a few bruised egos. Not only is this… END_OF_DOCUMENT_TOKEN_TO_BE_REPLACED