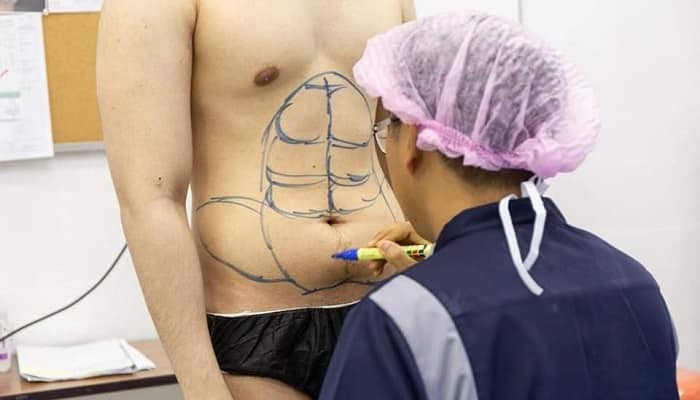 One of the biggest grinds before summer is getting an aesthetically “ideal” physique for that beach body you always wanted. This can be hard for people who do not have physical or athletic dispositions in life. Thankfully, like most beautiful things in the modern world, you can now fake a great body, starting with six-pack abs– now being offered through a surgery.

It all takes place in Thailand, that figures. A surgery business named Masterpiece Hospital is offering anyone a chance to get six-pack abs without doing exercise or diet for them. They’re also not your typical silicone injections on the abs just to make them pop out more. No, Masterpiece Hospital “etches” the abs, which is as bloody as it sounds.

The difference from silicone injections is that fake six-pack abs done this way last longer and look more natural. It removes some of the fat around the abdomen too. While the procedure looks painful, Masterpiece Hospital assures everyone that it doesn’t hurt.

Surprisingly, a lot of the surgery hospital’s patients are actually people who already workout but find their belly fat too stubborn. According to Raweewat Maschamado, CEO of Masterpiece Hospital, “In order to naturally get a six-pack, one needs to work out as well as get lean. Most of our clients come in with a lot of muscle, they just want to save themselves months of leaning down.”

The procedure costs 120,000 Thai Baht or $3800 and the recovery appears to be quite gruesome and not exactly for the squeamish:

“We’ve been doing this for about three to four years now. We get anywhere from 20 to 30 customers requesting a six-pack every month,” claimed Maschamado. In addition to six-pack abs, Masterpiece Hospital also offers cosmetic surgery for other body parts such as boob jobs, nose jobs, eyelids, and more. They assure everyone that they have an official license.

Gift-giving isn’t just a seasonal affair between friends, families and acquaintances. The art of gift-giving is also conducted on a national scale with countries often sending each other big, weird and expensive gifts. Experts in all things gifts, Vanilla Reindeer put together some examples of these expensive and odd gifts that have been shared between… END_OF_DOCUMENT_TOKEN_TO_BE_REPLACED

There are lots of ways you can make Pres. Trump feel welcome: you can offer him coffee, or mow a penis into a field for him to view as his plane lands. The willie in question has been chopped by Born Eco ahead of the arrival of President Trump, who visited the UK Monday for… END_OF_DOCUMENT_TOKEN_TO_BE_REPLACED

The year isn’t even halfway over, yet Donald Trump has managed to make a fool of himself and our country countless times. From inviting the national college football champions, the Clemson Tigers, all the way to the White House for some McDonald’s to his to the dreaded results of Mueller’s investigation, it has been one… END_OF_DOCUMENT_TOKEN_TO_BE_REPLACED

Republicans have always said that when they gained control in Congress, they would work to overturn Roe v. Wade and here they are, cashing in on that promise one state at a time. So far, Alabama, Arkansas, Georgia, Kentucky, Missouri, and Ohio have all passed incredibly restrictive laws on abortions, making it illegal for women… END_OF_DOCUMENT_TOKEN_TO_BE_REPLACED

If you’re on Snapchat, then you’ve probably played around with (and were likely horrified by) their filter gender swap filters. While you’re probably using these filters to send hilarious pics to your friends, some guys using them to create Tinder profiles. What likely started out as a joke has quickly evolved, and these guys are… END_OF_DOCUMENT_TOKEN_TO_BE_REPLACED

“Milkshaking” is a hilarious trend in Britain where a milkshake is thrown at and ideally lands on a far-right politician or activist. The point of this nonviolence protest is to humiliate them without causing injury. Physical injury at least. There’s no doubt that milkshaking has led to a few bruised egos. Not only is this… END_OF_DOCUMENT_TOKEN_TO_BE_REPLACED