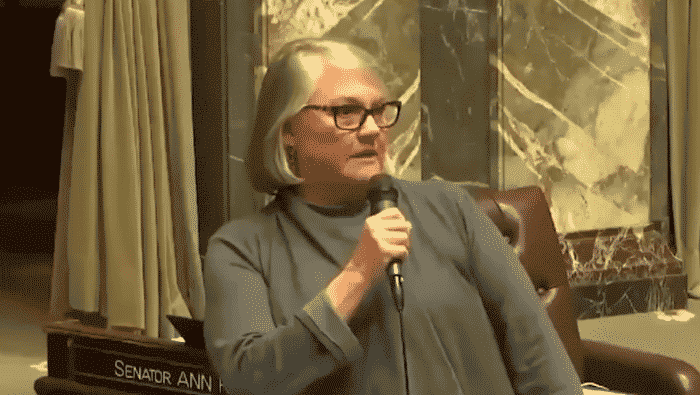 Republican Sen. Maureen Walsh caused an uproar on Twitter after making some incredibly ignorant comments during a debate over a bill that would significantly help out nurses. The bill, if passed, would provide nurses with uninterrupted breaks as well as protection against mandatory overtime. While most professionals already have the rights to this kind of work environment, being employed in a hospital where medical emergencies are the norm has subjected nurses to unfair and frankly dangerous practices. It’s not uncommon for those in this field to go without a break during their shifts and working extra hours has become expected.

Walsh, who has never been a nurse, decided that those who are busting their asses to keep people alive each aren’t worthy of the same legal rights as the rest of us. Here’s how Walsh’s outlandish comments inspired the hashtag #NursesPlayCards to go viral on Twitter.

In an attempt to show her support for an amendment that would exempt critical access hospitals in rural areas, and hospitals with less than 25 beds from the bill, Wash said:

By putting these types of mandates on a critical access hospital that literally serves a handful of individuals, I would submit to you those nurses probably do get breaks. They probably play cards for a considerable amount of the day.

Yikes, talk about being disrespectful! Patronizing the working class seems to be a trend among Republican politicians, as we all know that they’re all better than us. When it was pointed out that such an amendment would make it harder to find nurses to work in rural areas, Walsh proposed a bill that would prevent those who work in the field from working shifts longer than eight hours.

Well, if we have an issue with nurses getting tired, let’s quit letting them do 12-hour shifts, let’s let them do 8-hour shifts. Like most standard shifts are. Twelve hours, I know they want it, but then they come back and they start talking out of both sides of the mouth and telling us how tired they are.

Fortunately for Walsh, most of the #NursesPlayCards backlash made light of her statement. Their tweets are hilariously accurate and full of medical jargon that few people outside of the field even understands. Hopefully, Walsh doesn’t need medical attention any time soon, as it’s likely she’ll die waiting for it.

Nurses are making jokes, but there’s not a chance in hell they’ll be voting for Walsh when it comes time for her re-election. In fact, they’ve started numerous petitions demanding that she step down from her position. One petition even asks that Walsh shadow a nurse for 12 hours to experience what the men and women in this field actually deal with during an average shift. That would make for a hilarious reality show. Apparently, Walsh has agreed to do this, but perhaps we can encourage her to stand by her word by presenting her with a petition signed by a million people.

Other tweets were more serious and pointed out just how truly disrespectful and inaccurate Walsh’s comments were. Many even chose to share images depicting the horrors that nurses deal with on a daily basis. The pictures show bloody scenes you won’t soon forget with things like “Feeling cute, might play cards” written over them.

In 2017, Walsh had a heart attack that required her to have surgery and stay home from work for two weeks. While she praised the nurses and doctors who helped her at the time, it would seem that some nurses would like to remind her of those sentiments.

Walsh’s Response To The Backlash

Walsh originally responded to the backlash defending what she said. In a statement she explained:

The comment made about the ability to play cards was referring to the staff at the very rural and small critical access hospitals who may only serve a handful of patients and the staffing mandates are unnecessary. The fact is 61% of our critical access hospitals are in the red and the mandated breaks and lunch hours are not an issue in these facilities across the state. These are smaller, rural hospitals with much fewer patients than our urban hospitals and the bill is not necessary for them in meeting the needs of their patients or the hospital’s budget.

Her statements were almost immediately challenged by the Washington State Nurses Association who pointed out that most critical access hospitals (70%) are actually operating in a surplus. It would seem that Walsh has taken on the popular Republican habit of making up statistics in order to back their opinions.

As the backlash continued, Walsh seemed to have a change in heart. She told the Tri-City Herald that she was “tired” and said something she wishes she hadn’t. Funny how exhaustion can affect your decision-making skills, isn’t it? At least her exhaustion doesn’t put anyone’s life at risk as it does for nurses, but I’ll let this tweet express that thought:

Regardless if a nurse has one patient or thirty, they deserve a break to have some food and recharge. No one determines the length or quantity of breaks someone who works in retails gets based on how many customers go into the store that day. A customer service representative isn’t legally allowed to skip lunch if the phones don’t stop ringing. There’s no reason why nurses shouldn’t receive the same rights.

Gift-giving isn’t just a seasonal affair between friends, families and acquaintances. The art of gift-giving is also conducted on a national scale with countries often sending each other big, weird and expensive gifts. Experts in all things gifts, Vanilla Reindeer put together some examples of these expensive and odd gifts that have been shared between… END_OF_DOCUMENT_TOKEN_TO_BE_REPLACED

There are lots of ways you can make Pres. Trump feel welcome: you can offer him coffee, or mow a penis into a field for him to view as his plane lands. The willie in question has been chopped by Born Eco ahead of the arrival of President Trump, who visited the UK Monday for… END_OF_DOCUMENT_TOKEN_TO_BE_REPLACED

The year isn’t even halfway over, yet Donald Trump has managed to make a fool of himself and our country countless times. From inviting the national college football champions, the Clemson Tigers, all the way to the White House for some McDonald’s to his to the dreaded results of Mueller’s investigation, it has been one… END_OF_DOCUMENT_TOKEN_TO_BE_REPLACED

Republicans have always said that when they gained control in Congress, they would work to overturn Roe v. Wade and here they are, cashing in on that promise one state at a time. So far, Alabama, Arkansas, Georgia, Kentucky, Missouri, and Ohio have all passed incredibly restrictive laws on abortions, making it illegal for women… END_OF_DOCUMENT_TOKEN_TO_BE_REPLACED

If you’re on Snapchat, then you’ve probably played around with (and were likely horrified by) their filter gender swap filters. While you’re probably using these filters to send hilarious pics to your friends, some guys using them to create Tinder profiles. What likely started out as a joke has quickly evolved, and these guys are… END_OF_DOCUMENT_TOKEN_TO_BE_REPLACED

“Milkshaking” is a hilarious trend in Britain where a milkshake is thrown at and ideally lands on a far-right politician or activist. The point of this nonviolence protest is to humiliate them without causing injury. Physical injury at least. There’s no doubt that milkshaking has led to a few bruised egos. Not only is this… END_OF_DOCUMENT_TOKEN_TO_BE_REPLACED