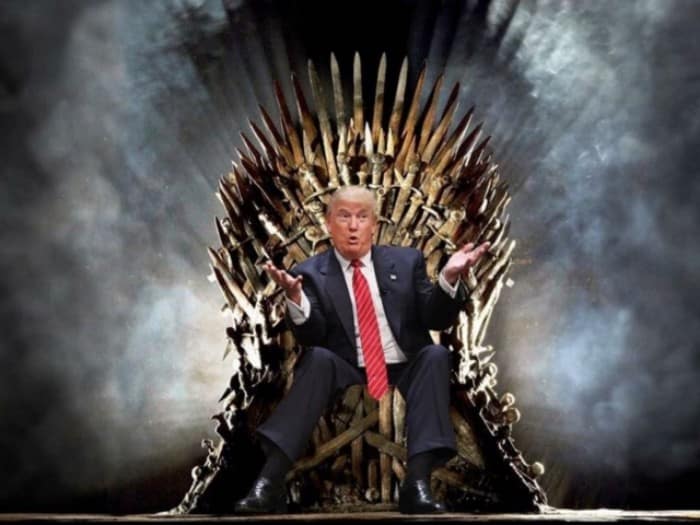 Game of Thrones is back on HBO for its final season, and if you’ve been tuning in each Sunday then you’re likely just as torn about this epic storyline coming to a close as I am. Fortunately, our country’s day to day political shenanigans is just as entertaining, if not more. GOT might be ending but we won’t be without full access to the fight for a seat on the Iron Throne, aka the 2020 presidential campaign.

The only downside is that Daenerys isn’t going to swoop down over Mar-a-Lago on one of her dragons and take care of Trump for us during one of his weekend getaways. Our country is in a frightful state, but at least these Game of Thrones memes can temporarily distract you from all of that.

Spoiler Alert! There are NO season 8 spoilers in this article. You’re welcome.

1. A Year Of This Man’s Presidency

It’s shocking just how many similarities there are between our government and a show that features fire breathing dragons, an army of the dead, and numerous incestual relationships. Here are just a few:

Both Littlefinger and Trump may both be willing to rule the ashes, but the two are nothing alike. While both can be considered a villain, Littlefinger used his intelligence to manipulate those around him in order to get what he wants. Trump, on the other hand, has no intelligence to work with. Instead, he uses his money and his lies to manipulate everyone. That is when he’s not being manipulated himself. Trump is more like the GOT character in the next meme.

We all know that Donald Trump is more like Reek than Littlefinger, or any other Game of Thrones character for that matter. Theon Greyjoy may have managed to escape his imprisonment, but it doesn’t look like Trump will be getting out of his presidential duties any time soon. Not without his arms handcuffed behind his back anyway.

4. Building The Wall Is Easy

What’s a wall without The Night’s Watch? Trump will never get the funding he needs to build a border wall, let alone the money to pay for the manpower to manage it. Too bad Trump can’t just send all of his bastard children out there to the wall in exchange for a roof over their head.

It’s not just the government that’s the problem. When Americans know more about the politics of a world created for a television show than about those in their own country, it’s safe to say that they’re part of the problem. While our education system didn’t do us any favors in this department, with the number of resources available to us on the internet, there’s really no excuse.

If I didn’t know any better, I would think these words were being spoken about Trump. He doesn’t exactly have the whole “better lies” part down as his lies are mediocre at best, but he certainly knows a thing or two about false promises. It’s probably easier to lie in a world where the quickest way to send a message is by raven and anyone who doesn’t believe those in power can be accused of treason and beheaded.

Mike Pompeo was appointed by Trump as Secretary of State and foreign affairs advisor just over a year ago, regardless of the man’s controversial past. Pompeo has expressed his support for torture methods used during interrogations overseas, and heavily criticized former President Barack Obama for closing black sites, which were undisclosed prisons used to interrogate suspects overseas. He also disagreed with the Obama administration’s insistence that interrogators adhere to anti-torture laws and has a history of making xenophobic comments. We literally have Ramsey Bolton advising the president of United States on how to be handle foreign matters.

The similarities between Trump and Joffrey are uncanny. Neither of them had leadership experience or the maturity level to handle such an important position. They’re both drunk with power, yet have no idea how to actually be in power. Their advisors are all there for show and are often ignored. Neither of them is well-liked by the people, causing riots and protests. The two of them both have a history of using their power to degrade and sexually assault women. Oh, and lastly, they were both murdered by poison. (Or was that in a dream I had?)

9. The Leaders Of Our Country

Royalty loved to keep it in the family, a tradition that seems to have been adapted our modern-day elites. While it has been long known that Trump has a weird relationship with one of his daughters, but it looks like Giuliani likes to keep the bloodlines pure as well. His wife is actually his second cousin. If you’re having a hard time picturing how gross this is, imagine your child marrying your cousin’s kid. To top it all off, Vice President Mike Pence calls his wife “mother,” and if that doesn’t convince you we’re all living in Westeros then I don’t know what will. These are the gems we have leading our country.

First came the Trump investigation. Then the Mueller report. Now, all we have to do is patiently wait for the sanctions and determined punishment. Maybe a beheading. Maybe a prison sentence. Maybe an hour alone in a room with all of the women who have accused him of sexual assault and rape. Whatever the court finds fitting. Hopefully, they don’t sentence Trump a walk of shame through Washington DC. No one wants to see that man naked with a shaved head, no matter how fun it would be to yell “shame!” at him and hit him with some old tomatoes or eggs.

Israel’s Iron Dome has protected the country against missile attacks for years. The Iron Dome in Israel is the biggest of its kind in the world. No other countries in the world use the same air defense system, meaning it is one of a kind. The tension between Israel and Gaza has been going on… END_OF_DOCUMENT_TOKEN_TO_BE_REPLACED

The world is devastated by the news that Britain’s Prince Philip, the Duke of Edinburgh, has died at the age of 99. Palace media confirms that the Duke has expired mid-day today, April 9th. The announcement did not contain any specifics on the cause of death. The United Kingdom will enter a state of national… END_OF_DOCUMENT_TOKEN_TO_BE_REPLACED

Who would have known that religious prophets would be among the most loyal supporters of former President Trump? In fact, it has been observed that the most conservative Christians may have been the right amount of push for Trump’s presidential win back in 2016. Since Trump’s election back in 2016, numerous self-proclaimed “prophets” have been… END_OF_DOCUMENT_TOKEN_TO_BE_REPLACED