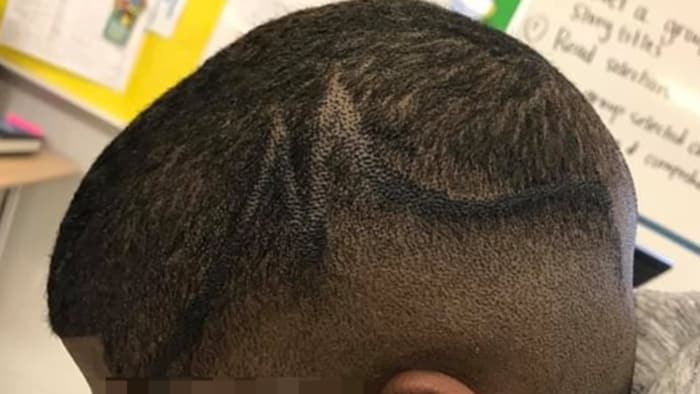 A high school administrator has been suspended after covering a black student’s fresh shaved hairstyle with a permanent marker.

The student’s haircut boasted the letter “M” on the left side of his head, which technically, is a district dress code violation. When the boy arrived at Berry Miller Junior High a day after receiving the loud hairstyle, an assistant principal provided him with three options: face disciplinary action, notify his mother, or hide it with a marker. Angela Washington, who reportedly is his mother, expressed on the now-viral Facebook post that the admin “decided to color my baby design with a PERMANENT MARKER” and never telephoned her to notify her of the incident. In a statement this week, the Pearland Independent School District indicated the child’s haircut violated the dress code, which implicates, “Hair must be neat, clean and well groomed. Extreme hair styles such as carvings, mohawks, spikes, etc. are not allowed.”

The district stated the administrator “mishandled” the situation and the measures do “not align with appropriate measures for dress code violations.” The assistant principal, who has yet to be identified, was put on administrative leave. “District administration has contacted the student’s family to express our sincerest apology and extreme disappointment in this situation, which does not fall in line with the values of Pearland ISD,” the statement claims. Mike Floyd, a board of trustees member in the district, is calling for the assistant principal to be terminated. “This is unbelievably unacceptable,” he wrote. “The culture in Pearland ISD must change, and the assistant principal who did this must be fired.”

Washington’s post has been shared thousands of times. Some of the 4,000 comments on her page want a lawsuit against the district to happen and several depict the ‘mishap’ as racist. “For everybody sniping about ‘following the rules’ … Just because something is a rule, that doesn’t make it right,” one Facebook user wrote. “Many of these school and workplace appearance standards tend to unfairly target typically black or ethnic hairstyles as inappropriate or unprofessional. That’s not acceptable. And there is NOTHING that excuses scribbling on a kid’s head with a marker!!!”

Student Gets ‘Arrested’ By School For Having Too Many Absences

School Bans Talking: Soon, No Eye Contact and No Smiling