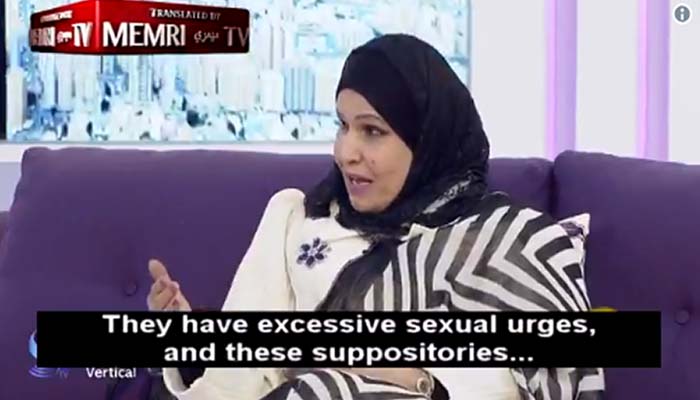 A Kuwaiti anti-lesbian and gay researcher claims to have discovered the reason behind homosexuality, and it involves butt worms.

According to academic Mariam Al-Sohel, gay men have a worm in their anus that “feeds on semen,” and that by treating these bugs their homosexual tendancies will be cured.

She’s so convinced of her theory, which she says is based on a combination of science and Islamic prophecies, that she went on TV to share it.

Appearing on Scope TV, which broadcasts from Kuwait City, she offered up a cure of “therapeautic suppositories” to destroy the worms. And we thought conversion therapy was bad!

However, this isn’t Al-Sohel’s only bizarre opinion. She also believes that their are four genders – “male, female, feminine gay men and butch lesbians” (oh Lord), and that homosexual urges are the result of being sexually assaulted.

In a clip shared by MEMRI, which covers news stories from the Middle East, the researcher can be heard saying: “As well as the fourth gender, which is butch lesbians.

“This is all science, so there’s nothing to be ashamed of. The sexual urge develops when a person is sexually attacked.

“So, what I did was to produce suppositories, which are to be used by certain people at a certain time.

“It cures those urges by exterminating the worm that feeds on the sperm.”

In the footage, Al-Sohel also debuts the suppositories, which come in several colours. She also claims that men who want to be more masculine should eat bitter foods to acheive their goal.

Watch the ludicrous exchange in the video below.

The moment he was inaugurated, immediate changes made by Biden made headlines across the country. These are many of the controversial issues and topics that were shunned and ridiculed by the former administration. Americans can finally breathe a sigh of relief that these concerns have finally reached government policies. It seems clear that Biden has been… END_OF_DOCUMENT_TOKEN_TO_BE_REPLACED

Presidential pardons are one and many in the history of the US. There are many times when US Presidents granted reprieves for their citizen’s misdeeds. The US President may grant a pardon for any individual, including himself, for any crimes done against the country and its citizens. This issue of Presidential pardons has been trending… END_OF_DOCUMENT_TOKEN_TO_BE_REPLACED